Jan Jarczyk (1947-2014)—a prominent Polish jazz pianist and trombonist, composer, arranger and educator—is being remembered this week by RadioJAZZ.FM in a series of broadcasts dedicated to the “Masters of Polish Jazz.” Sponsored by the EuroJAZZ Foundation for Promoting Jazz Music, these programs are part of the cycle of 100 radio shows curated by Rafał Garszczyński that air between Monday and Friday at 2:45 p.m. Central European Time. Broadcasts devoted to the life and work of Jan Jarczyk are taking place 19-23 July, available online at RadioJAZZ.FM.

For those unable to listen live, fortunately there is a wealth of information (alas, only in Polish) on Jan Jarczyk accessible at: jazzpress.pl/wyroznione/mistrzowie-polskiego-jazzu-vol-3-jan-jarczyk. The extensive article provides the readers not only with Jan’s detailed biography but also with several video clips featuring interviews and a number of live and recorded performances available on YouTube. 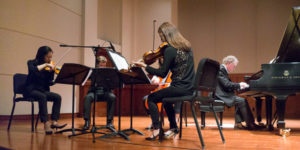 Some PMC patrons may remember Jan’s visit in Los Angeles in March of 2014 with a concert of his own compositions and arrangements of film music by Bronisław Kaper and Henryk Wars (see PMC Spring Concert – March 2014, pictured above). Performed by the Jan Jarczyk Trio and the Stella Cho String Quartet, we heard several of Jan’s works, including There is Always Time, Round, Round and Round, Conversation Tune and Little String Quartet No. 1. Fans of jazz standards also heard Jan’s takes on Kaper’s Gloria and On Green Dolphin Street as well as on Wars’s You’ll Never Forget Me and Never Say You’ll Never Fall in Love, among others. Sadly, this would be one of Jan’s last public performances. Only a few months later, in early August of 2014, Jan succumbed to cancer in Montreal, where he had been a McGill University professor for a number of years.