Joseph Anthony Herter, conductor, author and scholar, professor of music and concert producer, died in Warsaw on 12 December 2019. He was 74 years old.

It was a long journey from Detroit—a great Midwestern metropolis with a huge Polish émigré community—to Warsaw, which eventually became Joe Herter’s adopted homeland. This continental crossing began when Joe was still a young man, fresh with a music degree from the University of Michigan in Ann Arbor. A few years later, in the early 1980s, Joe traveled to Massachusetts for summer courses at Tanglewood, where he studied conducting with Seiji Ozawa and Kurt Masur. From early on, however, Joe’s most important goal was to return to the Polish roots of his parents and grandparents. Having thus set his compass and course, in 1974 at the age of 29, Joe arrived in Warsaw on a Kosciuszko Foundation scholarship, ready and eager to begin his musical mission.

In a way, it was a propitious time to be an American in Warsaw. After the political unrest in 1970 and yet another change of the government, it seemed that reforms—social, economic and political—would finally chart a better course for a population eager to enjoy a modicum of better living standards. Artistic life and individual expression also seemed to be less constricted by censorship and quite immune to meddling by party apparatchiks. Musical events could be organized and staged on budgets that appeared almost insignificant, especially to those who could pay the performers in foreign currencies.

The American School of Warsaw became a natural anchorage for this new arrival from the States. Teaching music to the children of foreign diplomats (as well as some Polish intellectual and social elites) was Joe’s calling anyway. He plunged headlong into this happy assignment—that also included leading a school choir—almost as soon as found a flat on Piwna Street, a narrow lane within the walls of Warsaw’s Old Town. Joe continued at the American School for thirteen highly appreciated years, only to be terminated suddenly and without just cause in 1988.

His pride injured but slightly by this unfortunate development (a reaction typical for those born under the sign of Leo), by 1990 Joe embarked upon two new adventures: founding of the Cantores Minores choir at the Warsaw’s St. John Cathedral, and assuming the position of a conductor at Teatr Rozrywki in the Silesian town of Chorzów in southern Poland.

Leading the Warsaw choir meant weekly rehearsals that began with a laborious ascent up the narrow and winding steps of an imposing Gothic cathedral. Once he arrived, Joe would check the attendance, distribute scores and carefully work through the repertoire with choristers and an organist. Introducing American and European liturgical music to Poland and presenting ancient and contemporary Polish music to audiences abroad was at the core of Joe’s musical mission. As the years passed, there were countless school and Christmas concerts, celebrations of anniversaries (including a concert commemorating Samuel Barber), over two dozen foreign tours with Cantores Minores and five tours of the United States. All of these activities made Joe Herter one of Warsaw’s leading resident musicians and, in fact, a cherished institution.

On the other hand, his position that started in 1989 at the Teatr Rozrywki in Chorzów gave Joe the wide latitude to program his favorite musicals from Fiddler on the Roof and Oklahoma, to Oliver, The Producers, Wizard of Oz, Jesus Christ Superstar and West Side Story. All of the shows proved enormously popular since up to that point Polish audiences could hear this music only on film or listen to the recordings.

One of his most remarkable achievements—that will remain in the annals of Poland’s modern history—was Joe’s presentation of Handel’s Messiah on Sunday, December 13, 1981, the day Poland’s communist government instituted martial law and banned all forms of public assembly. Enforced by police, tanks, armored carriers, water cannons and massive arrests of wide swaths of Polish citizenry, Warsaw was a city under siege on that ice cold and snowy day. It was also the day when Joe’s orchestra and choir—composed in equal measure of foreign and local musicians—braved the barricades and armed patrols in order to arrive at the Church of St. Anthony of Padua on Senatorska Street. Operating throughout the day from the safety of the American Embassy, Joe calmly answered anxious inquiries assuring everyone that the concert will indeed take place after a 5 p.m. dress rehearsal. An hour later the church was at capacity; the mood was tense, and the concert began. After the Messiah’s closing cadence reverberated across the ornate Baroque vaults and side chapels, a deep silence fell with the audience reflecting on what had just transpired musically and spiritually. This poignant silence was followed by prolonged and wild applause mixed with tears of sorrow for yet another tragic political development in Poland. Exactly twenty years later, when Poland was a prospering and free country, Joe repeated his Messiah at the same location to mark the anniversary.

Personal courage was something Joe always had in spades. During the years of martial law, when most Poles could not travel abroad, Joe bravely carried documents and correspondence from Polish dissidents and delivered them to various recipients abroad. Although as an American citizen he was less likely to be searched by border guards, he nonetheless risked serious administrative consequences if any of the underground materials were discovered by the authorities. Another example of his uncompromising attitude towards political realities in Poland was a concert dedicated to the memory of Father Jerzy Popiełuszko, a young Catholic priest brutally murdered by secret police during the dark period of martial law. Joe’s motto, “Czyny, nie teoria” [deeds, not theory] was consistently applied to everything he ever did and remained his primary guiding principle.

An American in Warsaw

Joe Herter loved Poland and felt Polish. After a few years he largely mastered his ancestors’ language and found his own place in the adopted homeland. He also enjoyed in Polish cuisine, being especially partial to cakes, ice cream and sweets of any kind. Afternoons were always a good time to drop by one of Warsaw’s cafes for just such a treat. Many years later, when Dunkin Donuts’ franchises opened in Warsaw, Joe was ecstatic to be able to enjoy his favorite American sweets as well.

The new millennium started well for Joe. In addition to musical duties, he also became a representative of the Kosciuszko Foundation in Warsaw and worked for several hours each week at the elegantly appointed office on Nowy Świat, just a stone’s throw from Plac Trzech Krzyży. Aided by research grants, including the Kosciuszko Foundation and Ars Musica Poloniae, Joe’s extensive study of the life and work of Zygmunt Stojowski—pianist, composer and a close friend of Paderewski—first blossomed into a series of articles for the Polish Music Journal online. A short time later Joe expanded them considerably and turned them into a book, Zygmunt Stojowski—Life and Music, that was published by Polish Music Center at the University of Southern California in 2007, and eventually led to the donation of Stojowski’s extensive personal archive to the PMC. The Polish language translation of this volume is currently being prepared for publication by PWM.

Serving Music and Poland Until the End

Always a free spirit, Joe lived large and rarely took notice of how his action-filled life affected his health. Exercise and diet were as unwelcome as the need to deal with the more mundane details of everyday life. With the passing of years, Joe’s optimistic outlook and cheerful spirit could not overcome the realities of his actual physical condition. A heart attack in 2016 was quickly followed by a chronic lung congestion and coupled with partial loss of speech and memory. A yearlong and largely successful convalescence at the rehabilitation centre in Otwock near Warsaw enabled Joe to return home about a year later and at least partially resume his daily activities. This amazing improvement was due in large measure to tender and loving care of Joe’s longtime partner, Wojciech Hulewicz. They met at a New Year’s Eve party in Kraków in 1989 and for over twenty years had lived together in Wojciech’s Warsaw apartment. With each passing year, Joe had to rely more and more on Wojciech’s assistance, something Wojtek—as he was known to all of Joe’s friends—was always more than happy to give. 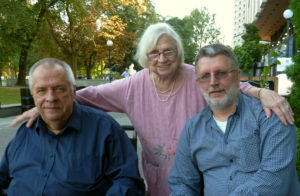 As Joe’s retirement from music finally became inevitable, he was at least able to enjoy the honors and awards from a variety of organizations and individuals, who recognized the towering achievements of this exceptional artist and human being. During his final and very difficult weeks, Joe was surrounded by many friends and musical collaborators. Finally, the Polish government recognized his tireless efforts in the field of music when Joe was decorated with the Bronze Gloria Artis medal, and the ceremony was held at Joe’s hospital bedside only a few days before his passing. The notice of the Silver Cross of Merit, awarded by Poland’s president and dated October 1, unfortunately had to be delivered posthumously. Years ago, a quote from one of his concert posters summarized Joe’s life work succinctly: “There may be 540 Stradivarius violins in the world, but only one Joseph Herter.”

Joe Herter is survived by his sister, Joan Herter Moore of Portage, Michigan, nephews Gregory and Jeffrey Moore and Daniel and Michael Perkins, and nieces Lori Moore, Diane Camilleri and Susan Solis. A memorial service is planned for 13 January 2020 in Warsaw with further details to be announced in the coming weeks.