In spite of the worldwide pandemic and music stages having fallen silent, our friends in the music world continue to be active and supply the Polish Music Center’s library with some well-timed gifts.

During the last week of September, two excellent CDs had reached our mailbox—one from a local patron in Southern California, the other all the way from Poland. LA-based dancer and choreographer Irene Ujda sent us a recording featuring the great Polish tenor Piotr Beczała, in a repertoire of songs by Stanisław Moniuszko and Mieczysław Karłowicz (NIFCCD 114). Issued by the National Fryderyk Chopin Institute (NIFC) in collaboration with the Grand Theatre—National Opera in Warsaw, this CD was produced to commemorate the bicentennial of Moniuszko’s birth in 2019. On this recording, we can hear Beczała in a small sample of Moniuszko’s most famous songs, including Prząśniczka [The Spinning Maiden], Znasz-li ten kraj [Knows Thou This Land?], and Polna różyczka [A Field Rose]. 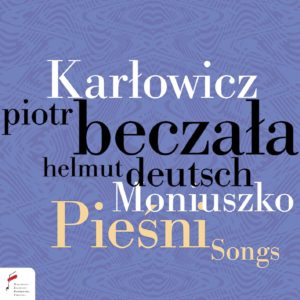 A short video about this CD project can be seen at: www.youtube.com/watch?v=-xygQDdLZ_0.

Maria Dutka-Shetty, violist of the Kraków-based Messages String Quartet, sent us her quartet’s latest CD, featuring works by Stanisław Moniuszko, Sir Andrzej Panufnik, and Krzysztof Penderecki (DUX 1586). As usual with the Messages Quartet, their repertoire presentation is as musically varied as their interpretation is inspired. The romantic spirit of Moniuszko’s String Quartet No. 1 in D minor finds a truly sympathetic and understanding reading from members of Messages, with a strong emphasis on warm string sound and genuinely lyrical approach to all of Moniuszko’s attractive melodic lines.

The highly atmospheric String Quartet No. 2 by Panufnik—which is actually subtitled “Messages”—receives an eerily insightful, delicate and deeply lyrical treatment from the Messages String Quartet, who chose their name from this, their favorite, work. And indeed, the Messages’ interpretation ideally dovetails Panufnik’s comments made before this work was published by Boosey & Hawkes in 1981:

“My Second String Quartet in an abstract work, with no literary programme. However, the idea behind it is very personal and is connected with a memorable experience from my childhood.

When I was seven or eight years old, on holiday in the country, my favourite pastime was to put my ear to the wooden telegraph poles and listen to sounds produced by the wires vibrating in the wind. After a while I became convinced that I was listening to real music—which retrospectively I think was my first experience of the creative process, as for the first time I made use of my musical imagination. When I came to compose my Second String Quartet, I decided I would try to draw upon those childhood fantasies, allowing them to suggest to me both design and musical material.

The work is composed in one continuous movement, and is based on two cells only: a tetrad (four-note cell) and a triad (three-note cell) with all their reflections ad transpositions. It is almost like a secret code, as if the message perhaps was written not with words, but with squares and triangles replacing ordinary letters.

Although I have designed a framework with a most rigorous structure, my main intention was to compose a fantasy-poem, with real musical substance, and to convey to the listener some of the mysterious messages which I used to overhear in my imagination from the telegraph poles. The work starts exactly as I remember from my childhood: from total silence, through to a hardly audible chord (tetrad), gradually transformed into melodic lines, which weave throughout the work into various shades of poetical expression, returning finally to the first chord, which eventually dissolves into silence.”

The final offering on the Messages DUX release is Penderecki’s String Quartet No. 3, subtitled “Leaves from the Unwritten Diary,” a work dating from 2008. The Messages Quartet brings to this late and introspective composition just the right mix of warmth and 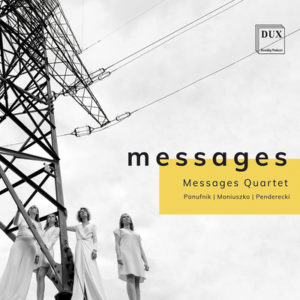 nostalgia interspersed with echoes of the modernist sonority that first catapulted Penderecki into worldwide fame some 60 years ago.

The official trailer for this recording, where you can see the Messages String Quartet in action and listen to fragments of Penderecki’s Quartet No. 3 is at: www.youtube.com/watch?v=mrk_b7AZUoM

Additional information about the performers and their latest release can be found at: messagesquartet.com and www.arkivmusic.com.

Dr. Nancy Fierro, a pianist, Bacewicz scholar and a long-time friend of the Polish Music Center, remembered us with another donation of materials relating to Grażyna Bacewicz. The PMC library will be substantially enriched by the following items received from Dr. Fierro at the very end of September:

In addition to this donation, we just received scans of photographs of Wanda Bacewicz with Nancy Fierro taken during her visit in Poland in the late 1980s. 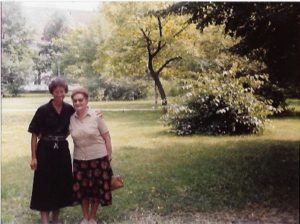 Notes from the Other World 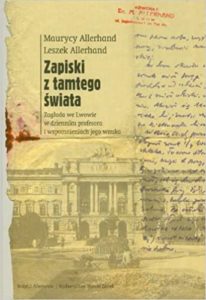 Another welcome donation came from Dana Schwartz in the form of a fascinating book by Maurycy and Leszek Allerhand, Zapiski z tamtego świata [Notes from the Other World]. This touching memoir about living in Lwów during World War II has two authors: Maurycy Allerhand, a renowned professor of law at the Jan Kazimierz University in Lwów and his grandson, Leszek. Professor Maurycy Allerhand, who also was a member of Polish State Tribunal during the inter-war years, wrote his memoirs in the Lwów ghetto during the years 1941-1942, before he was murdered in the Janowski Camp in Lwów in 1942. His writing not only sheds light on a carefree childhood before World War I and during the years of the Second Polish Republic, but also chillingly depicts how a legal system can become corrupted and be used against the population, especially the Jews. Leszek Allerhand, a young boy in the early 1940s, describes in terrifying detail how he and his parents left the Lwów ghetto while his grandparents stayed behind and perished. Over the next two years, Leszek and his parents had to endure a terrifying ordeal of hiding in apartments of various friends and strangers who had to be paid off, and even spending months in the semi-abandoned crypts of the famed Łyczakowski Cemetery. They suffered bouts of dangerous illnesses and hunger, as well as the constant fear of being discovered and annihilated by German or Ukrainian police. Their extraordinary odyssey ended in late July of 1944, when the Soviet Army captured Lwów. 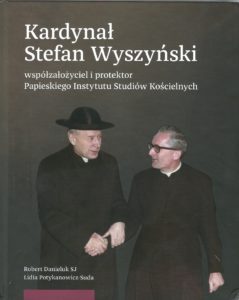 This richly illustrated album includes fascinating historical documents, photographs and artifacts relating to the Primate of Poland’s activities in Rome. It will be a great reference item in our library and our thanks also go to the principals of the Wielkopolsko-Mazowiecka Province of SJ in Warsaw, who mailed this book to us a few weeks ago.

From our friends at the Art Institute of the Polish Academy of Sciences (ISPAN), we received another tranche of fascinating publications for the PMC library. The Beginnings of Polish Musicology by Małgorzata Sieradz (translated by Lindsay Davidson) is a comprehensive compendium of scholarly articles on the topic of Polish musicological journalism starting from 1820, when Tygodnik Muzyczny [The Musical Weekly] first appeared in Warsaw.

Building on Karol Kurpiński’s wish to explain “the grammar of the language of music to the readers,” the pantheon of Polish musicologists receives prominent coverage in this book alongside extensively discussed publications such as Młoda Muzyka [Young Music], Przegląd Muzyczny [Musical Review], or Kwartalnik Muzyczny [Musical Quarterly] in the early 20th century. Moving on to the interwar period, Lwowskie Wiadomości Muzyczne i Lietrackie [Lwów Musical and Literary News], Przegląd Muzyczny and Mateusz Gliński’s Muzyka also receive wide-ranging attention. A substantial section of this excellent book, “Difficult Years—Kwartalnik Muzyczny in the Years 1948-1950,” deals with such sensitive issues as “bourgeois” and Marxist musicology, how ideology influenced learning about music, as well as the role of conferences and congresses and the creation of the Polish Music Publishers [PWM], which to this day remains a powerhouse in the realm of Polish Music.

The history of music societies and professional clubs—including the Polish Society for Contemporary Music, Polish Musicological Society, Frederic Chopin Institute, and Association of Early Music Lovers—are yet another large and fascinating topic that is treated with a great deal of insight by the author. Readers are also appraised of a discussion regarding socio-scientific contexts, the functioning of the musicological environment throughout the historical continuum, and the world of academic publishing, among others.

Recently published by Peter Lang Verlag in Berlin, this hardcover book is Volume 20 of the Eastern European Studies in Musicology series edited by Maciej Gołąb. To anyone interested in history of Polish musicology this is a must read, all 500+ pages of it! 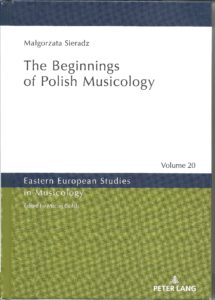 Also in the same parcel from the Art Institute of the Polish Academy of Sciences, we received two issues of the Muzyka quarterly for the year 2020: No. 1 (256) and No. 2 (257). As always, this journal features a variety of articles on topics of theory and history of music, some of them in English while others are accompanied by English abstracts. Among English-language articles in No. 1, we find Allen Scott’s essay on the Lutheran Reformation Liturgy in Breslau and Aleksandra Litwinienko’s captivating description of the 18th century fife from the wreck of General Carleton of Whitby that sank on the Baltic coast in 1785. No. 2 features articles by Agnieszka Leszczyńska on Emanuel Wurstisen and his tablature, and Johannes Agustsson on the Galuppiana Consignments for August III and Count von Brühl in Warsaw in 1757-1761.

These two volumes will be added to our Muzyka library shelf and shared with all kinds of students and researchers interested in Polish music.

Thank you to all of our donors! Dziękujemy!