On Sunday September 13, the newly re-branded Holocaust Museum LA (formerly the Los Angeles Museum of the Holocaust) will present a livestream broadcast of Cracow Duo: Live From Krakow’s Jewish Quarter. This special live performance by cellist Jan Kalinowski and pianist Marek Szlezer—known collectively as the Cracow Duo—will be streamed from the Center for Jewish Culture in Krakow’s historic Kazimierz Jewish Quarter. 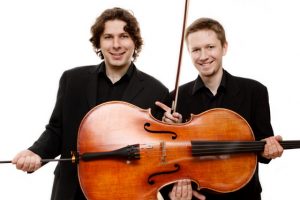 Friends since childhood, Kalinowski and Szlezer began to perform together as Cracow Duo over fifteen years ago. Since that time, they have performed to critical acclaim in prestigious venues throughout the world, including Carnegie Hall. Kalinowski and Szlezer share a special commitment for music written by rarely performed Polish composers as well as works by contemporary Polish and foreign composers written specially for them. Cracow Duo’s artistic vision coupled with virtuosity and extensive concert experience creates interpretations that are emotional, sincere, and spontaneous.

Cracow Duo’s September 13 program will include the following:

This concert is organized in collaboration with the USC Polish Music Center, Consulate General of the Republic of Poland in Los Angeles, and Polish Cultural Institute New York.