Amazingly enough, Józef Beer (1908-1987), a very successful composer of operas, operettas and other stage works, is still largely unknown in Poland. Born near Lwów (now Lviv), he came from a well-to-do family of bankers and, at his father’s insistence, first studied law at the University of Lwów. After getting a law degree, Beer entered Vienna’s Hochschule für Musik to study composition with Joseph Marx and graduated with the highest honors in 1930.

Working as a composer and conductor, Beer met the librettist Fritz Löhner-Beda with whom he collaborated on the operetta Der Prinz von Schiraz [The Prince from Shiraz], which opened to rave reviews after a 1934 premiere in the Zurich Opera House. Die Polnische Hochzeit [The Polish Wedding] was Beer’s second operetta and it too won over the public as well as the critics after its world premiere in Zurich in 1937. During the next two years, The Polish Wedding toured major European stages and was translated into several foreign languages from the original German libretto.

After the 1938 Austrian Anschluss, Beer had to flee the Nazis and settled in Paris. When Germans invaded Paris in 1940, he enlisted in the Polish Army-in-exile and unsuccessfully tried to reach England by boat from Bordeaux. After escaping to Nice, Beer lived under an assumed name and survived the war, while his parents and sister perished in the Lwów ghetto.

Beer’s subsequent opus includes Stradella in Venedig [Stradella in Venice], an operetta written in hiding in Nice during the war and premiered in 1949 in Zurich, and the oratorio Ave Maria, dating from 1946 and premiered at the Notre Dame Cathedral in Nice. His last two works were operas, La Polonaise (1975), and Mitternaschtssonne [The Midnight Sun], the latter completed shortly before his death. 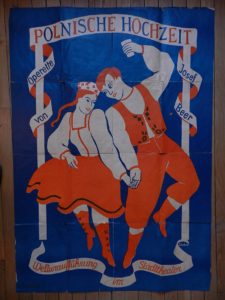 Beer’s Die Polnische Hochzeit remained in the repertoire through various revivals, especially in Scandinavia, where the work was known under a title Masurkka, perhaps because the composer never gave his formal consent for the revival in Sweden, and it remained in repertoire there until the early 2000s. A new staging of the work in Linz was awarded the Austrian Music Theatre Prize last year, and this year the ICE Congress Center in Kraków will present The Polish Wedding on November 29.

The action of the operetta takes place in 19th century Poland under foreign partitions. The protagonist, Bolesław, is a young patriot and insurrectionist who has gone into hiding in Austria. Longing to be reunited with Jadzia, the love of his life, Bolesław makes a risky return to Poland only to find that his rich nobleman uncle, Count Zagórski, persuaded Jadzia’s less-well-off father, Baron Ogiński, to agree to their wedding. All kinds of complications ensue, accompanied by traditional Polish dances, including hearty mazurkas, stately polonaises and dashing krakowiaks, written into the score in abundance.

The premiere of Die Polnische Hochzeit under its Polish title, Polskie wesele, is scheduled for 29 November 2020 at the Kraków Congress Center, organized by the Kraków Culture Forum. Soloists Edyta Piasecka, Anna Bernacka, Wojciech Gierlach, Robert Gierlach, Pavlo Tolstoy and Tomasz Rak will be joined by the Polish Radio Choir and the Beethoven Academy Orchestra under the baton of Maestro Łukasz Borowicz.

Due to current COVID-related restrictions in place in Poland, tickets are no longer being sold to this event. However the performance will be held and broadcast live via the VOD PLAY KRAKÓW platform.