Our friends at the Polish Institute of Arts and Sciences in Montreal pleasantly surprised us with their recent gift of a book, Lutosławski—Music and Legacy, courtesy of the Institute’s Chief Librarian, Stefan Władysiuk. Published in 2014 and edited by Stanisław Latek and Dr. Maja Trochimczyk, this carefully prepared volume evolves around four large-scale topics: Witold Lutosławski’s biographical information, his style, technique and legacy, analyses of individual works, and a reminiscence of the composer’s 1993 visit in Montreal. 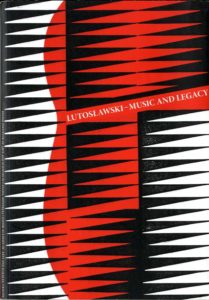 Many distinguished scholars, including Robert Aitken, Taylor Brook, James Harley, Chris Paul Harman, Lisa Jakelski, Stanisław Krupowicz, Karol Lipiński, Grzegorz Michalski, Charles Bodman Rae, Maja Trochimczyk, and Duncan Schouten contributed essays and interviews for this publication. A biographical calendar with a timeline of Lutosławski’s life and a list of his works as well as some photographs round off this excellent compendium.

Without a doubt Lutosławski—Music and Legacy will be a valuable addition to our library and serve as yet another good resource for students, faculty and scholars interested in Lutosławski’s life and work.

A TREASURE TROVE OF LETTERS

The Art Institute of the Polish Academy of Sciences (ISPAN), continues to shower us with their new publications, for which we are always immensely grateful. The latest parcel to reach us had two items, the periodical Muzyka No. 3 (258)/2020 and Adolf Chybiński—Ludwik Bronarski: Korespondencja cz. 1, 1922-33, the first volume of correspondence between two great figures in history of Polish musicology. 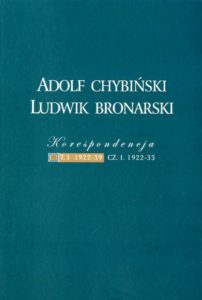 Ludwik Bronarski (1890-1975) was one of the leading musicologists and Chopin researchers in the inter-war Europe. His pioneering 1935 study, Harmonika Chopina [Chopin’s Harmony], as well as his great editorial work with Ignacy Jan Paderewski and Józef Turczyński on Chopin’s Complete Edition of Works place him among the pantheon of scholars on this subject. Adolf Chybiński (1880-1952), a legendary musicologist, historian and academic, founded the musicology department at the University of Lwów in 1910. Their lifetime correspondence spans the years 1922-1952, and this volume covers only the first decade with the remaining letters all the way until Chybiński’s death in 1952 expected to be published in the near future.

A fascinating cast of characters appears on the pages of this excellent anthology, thoroughly edited and extensively annotated by Małgorzata Sieradz. Bronarski was a frequent guest at Paderewski’s Swiss residence, Riond-Bosson, where he also met another composer, author and musicologist (and a close friend of Paderewski), Henryk Opieński (1870-1942). Bronarski and Opieński were closely involved in such publications as Kwartalnik muzyczny [The Musical Quarterly] published from 1911-1914, and with the Przegląd muzyczny [Musical Revue], published in the 1920s. This correspondence provides a new and fascinating perspective on the musical life in Poland of that era, and provides a wealth of captivating details on many leading names in the academic, performing and publishing circles.

We are already anticipating the publication of the second volume of these letters and hope to receive them as soon as they appear in print!

Another remarkable book that reached us recently came courtesy of Jadwiga Pinderska-Lech, head of the publishing unit at the State Museum Auschwitz-Birkenau. Published by the Museum and the Ministry of Culture and National Heritage under the title, Poselstwo RP w Bernie. Przemilczana historia [The Republic of Poland’s Embassy in Berne. A secret history], this fascinating volume was authored by Danuta Drywa. Based on recently discovered documents from the Polish Embassy in Berne, this book details a remarkable story of courage and indomitable will displayed by Polish diplomats in order to save several thousand Jews from the Holocaust. 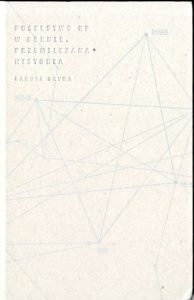 Real stories are sometimes stranger than fiction. In this case, during the darkest days of World War II in the outwardly neutral Switzerland that was surrounded by Nazi-governed countries, Polish officials were issuing fake South and Central American passports to Jews trying to flee Europe. Working together with the Swiss section of Agudat Israel, Jewish Joint Distribution Committee in the U.S., the International Red Cross and the World Jewish Congress, the Berne-based Polish diplomats created new identities and issued about eight thousand passports that undoubtedly saved countless lives. Several Embassy officials, including Ambassador Aleksander Ładoś, Consuls Konstanty Rokicki, Juliusz Kühl and Stefan Ryniewicz are vividly depicted on these pages that are illustrated with many heretofore-unknown documents and photographs.

By another curious coincidence, this book also dovetails into one of the PMC’s Archival Collections. A few years ago, we received a significant donation of musical manuscripts, correspondence, concert programs, photographs and other memorabilia from the widow and daughters of Roman Ryterband (1914-1979). Ryterband was interned in Switzerland during WW II and lived there until 1954, when he moved to Canada and, later, to the U.S. During his sojourn in Berne, Ryterband appeared as pianist, conductor and composer in many concerts and shows featuring Polish history and culture. Some of them were organized by Stanisław Nahlik (1911-1991), the attaché at the Polish Embassy in Berne, who became a good friend of the composer. During his posting in Berne, Nahlik was the founder of Polski Komitet Pomocy Ofiarom Wojny [Polish Aid Committee for the War Victims]. He was a distinguished academic and specialist in international law who lectured at Europe’s most prestigious universities. Back in Poland after the war, Nahlik worked in the Ministry of Culture and was active in repatriating Polish artwork that was stolen during the war. Roman Ryterband maintained his contacts with Nahlik until the 1970s, and to this day their friendship is fondly remembered by Ryterband’s widow, Clarissa.

It would be truly wonderful if the publishers could translate Dr. Danuta Drywa’s book into English and have it distributed all across the world. This story—like so many little-known but important stories of World War II—clearly deserves to reach a much wider audience.

Thank you to all of our generous donors! Dziękujemy!