Over the past several years, the PMC has hosted a number of excellent young performers from Poland. Many of our friends and supporters saw their concerts at USC, the Los Angeles County Museum of Art, the Los Angeles Museum of the Holocaust, and the Paderewski Festival in Paso Robles. This year, some of these musicians were re-invited to present works by several different Polish composers in concert. Alas, our events scheduled for spring 2020 and beyond have been cancelled due to the pandemic and worldwide restrictions on travel and public gatherings, but thankfully many of these excellent artists continue to share their talents virtually. 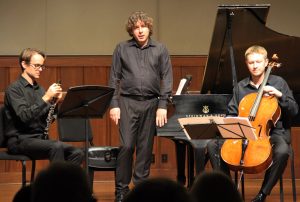 Cellist Jan Kalinowski and pianist Marek Szlezer—also known as the Cracow Duo—were one of the groups we invited to perform at USC this spring. Although they were unable to make it to Los Angeles in late March, their music is still just a click away on the internet. You can visit the Cracow Duo’s You Tube channel, where all kinds of concerts as well as their other adventures on various continents can be seen.

One fine example of the Cracow Duo’s short and well-made video clips features their recent tour and performances in Chile. It is but one part of their very entertaining You Tube series, “Cracow Duo on Tour.” This particular clip, illustrated with videos from Santiago and vicinity and embellished with comments in Polish (with English subtitles), can be found here. And, once you’ve seen that fun clip, you will want to click on other links to Marek and Jan’s concerts, from Sweden to Slovenia and Poland to Paso Robles!

Just like the Cracow Duo, pianists Grzegorz Mania and Piotr Różański also hail from Kraków and are on the faculty of the Kraków Music Academy and other music schools in the area. During the past few years, Mania and Różański (with their talented SPMK friends) performed at USC and the Los Angeles Museum of the Holocaust, presenting several lesser-known composers whose music is certainly worth of exploring. A small sample of their artistry as a piano duet, can be seen in this beautiful video of them performing selections from Juliusz Zarębski’s Tańce Galicyjskie Op. 2 [Galician Dances] for piano 4-hands.

In addition to their work as a duo, maestros Mania and Różański are founders and active members of SPMK [Stowarzyszenie Polskich Muzyków Kameralistów, or the Polish Chamber Music Society]. This active society produces concerts, publishes books and organizes a number of festivals. SPMK has a You Tube channel where you can subscribe, and you can also follow them on Facebook, to see and hear the very latest in excellent music-related events organized by the group.

Polish guitarists are also present in a number of superb video recordings on the web. Bartosz Paprot, for example, has a series of solo guitar works by Aleksander Tansman he recently recorded at the Guitar Salon Series in Santa Monica. Here is the introductory link to Bartosz Paprot’s consummate and passionate interpretation of Tansman’s superb Passacaglia—and from there you can further explore to your heart’s (and ears) content other recordings by this fine artist. 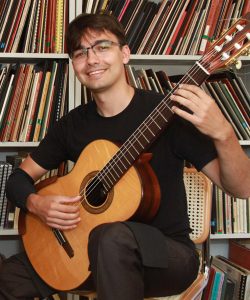 Guitarist Tomasz Fechner, a 2020 Outstanding Thornton School of Music graduate and a former Fulbright Scholar, is quite a virtuoso with a number of videos featuring solo guitar works by Astor Piazzola, Aleksander Tansman and Heitor Villa-Lobos, among others. We would like to recommend his recording of Roman Ryterband’s Sonatina for Classical Guitar, a work Tomasz had thoroughly edited, extensively annotated and prepared for publication by PWM [Polish Music Publishers] in December of 2019, as well as his latest recording for Guitar Salon International of Heitor Villa-Lobos’s Mazurka-Chôro.

And, speaking of Roman Ryterband (whose music is only now being discovered, four decades after he died in Palm Springs, California), visit the PMC YouTube channel to hear a beautiful performance of his Deux Images for harp solo from a 2017 concert at the Los Angeles Museum of the Holocaust. The piece is held in the Roman Ryterband Collection at the PMC. 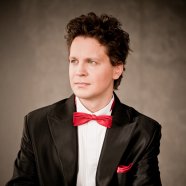 Pianist Daniel Vnukowski is another artist who has performed in Los Angeles for us at USC and for several other institutions (LACMA, LAMOTH) during the past few years. He, too, is passionate about discovering music by less-known Polish composers, including Karol Rathaus, for example. On his CD of music by Rathaus you can hear the fascinating Op. 24 no. 3 Mazurka.

If your taste is for more traditional Mazurkas (like those by Chopin), check out Dan’s live concert here. He is also performing a new live concert every Saturday at 12pm Pacific/3pm Eastern. His schedule for the month as announced so far is May 9: “24 Preludes of Chopin” (this broadcast can be viewed here) and May 16: “A Beethoven 250th Anniversary Tribute”. To view these concerts live, simply visit www.danperforms.com for a free members-only link.

Isn’t it wonderful that, in spite of sheltering at home orders, beautiful music by Polish composers performed by our friends is so easily accessible on the World Wide Web?

With warmest wishes for a wonderful virtual concert experience and, until the time we can gather live in the concert halls, stay strong and healthy and listen to Polish music!