The iconic Sunday afternoon open-air summertime concerts at Łazienki Park in Warsaw, featuring music by Fryderyk Chopin, have been moved online due to the pandemic and restrictions on public gatherings. As of May 17, this longstanding tradition—a great favorite with tourists and locals alike—became a virtual experience. The first in the planned series of video concerts was given by pianist Karol Radziwonowicz. His performance was recorded inside the 18th century Orangery building, part of the Łazienki Summer Royal Palace complex, rather than at the Chopin monument on the Łazienki park grounds. Watch the full concert on YouTube.com. 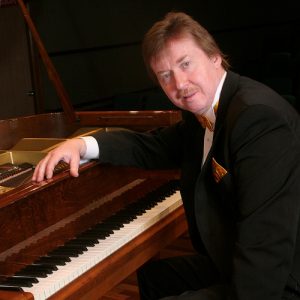 It is certainly a different experience—for the performer and the public—to play inside a long, empty hall with a stone floor rather than listening to Chopin’s music accompanied by the summer breezes rushing through the groves of ancient trees and the hissing and splashing of distant fountains, and hearing all kinds of birds adding their trills to the music drifting in the air. Asked about the details of arranging this particular performance, Maestro Radziwonowicz said:

The entire concert was sponsored by TIFC and Stołeczna Estrada [Capitol Stage] agency, since they organize the Chopin concerts under the monument.  The director of the Łazienki Palace museum was afraid that if the concert were held outside, under the monument, people would gather around without adhering to physical distancing… So, there was a chance that the entire series would be cancelled. But, together with TIFC, I was able to prevail, arguing that concerts under the monument were held without any interruptions for 60 years. This will be the 61st season. Even during martial law [in the early 1980s], in spite of a ban on public assemblies, these concerts were taking place. Overall, it was a success to launch the series, online for the moment, and maybe we could return to the original Chopin monument location by July 15.

We are also very fortunate that Karol Radziwonowicz was able to share with us his innermost thoughts on performing and recording this concert:

Whenever I’m offered a concert, my first question is about the size of the hall and, naturally, about the number of seats. My other questions are about the acoustics and the instrument.

For me, the audience is most important. During a concert, I can really sense the mood of the listeners who wanted to come and hear a concert. I can safely say that a reciprocal relationship between the artist and the audience guarantees a good concert. It’s a kind of a mutual reinforcement. Someone had once said that the audience listens as perceptively, just as the artist’s performance is perceptive. It’s true. But I can also safely say that the artist plays as well as his audience is listening to him. During performance, a metaphysical bond of sorts is created between the audience and the artist. Sensing its existence is the most wonderful experience for the artist who, together with his public, is transported into the surreal and infinite world of feelings.

Performing a concert in an empty hall for two stationary television cameras is always a challenge for me. The sound engineer is listening backstage to the sound from two microphones placed next to the piano in the hall. There is no dimming of lights over the stage. There is no hearty applause. I cannot sense the mood of the audience or feel the acoustics of the space, because I realize I’m playing for two motionless microphones. There are no sighs in the audience; nobody makes noise by accidentally dropping something to the floor. No whimpering children. The hall is quiet and still.

Playing a recital under such conditions—and knowing that each note I play will be forever documented by the internet—is not an easy task. At such times, however, I always remember my father’s words. He was a pianist, pedagogue and my teacher, who held that challenges are what truly matters in life. St. John Paul II also used to say that in life only difficult tasks matter.

Taking up such a challenge means becoming one with the music inside one’s own feelings. One has to give in to the musical narrative, forgetting where the concert is actually taking place. Chopin’s music is all that matters at such a moment. Then, an instant later, my own imagination conjures up the audience listening to my concert transmitted all over the world via the internet. The joy of sharing my feelings with them returns instantly. A situation that, just a moment earlier seemed very difficult, turns into the innermost joy of creating. The silence of an empty hall stops being an impediment; on the contrary—it becomes helpful in terms of listening to the finest nuances of the interpretation. A challenge turns to joy. The music wins.

[Sources: correspondence with the artist, reuters.com]