It is so very encouraging that, in spite of the pandemic and the worldwide disruptions it has brought to what we once referred to as “normal life,” friends of the Polish Music Center continue to remember us and send us all kinds of gifts. The first on this list of recent donors is Instytut Sztuki—Polska Akademia Nauki [Art Institute of the Polish Academy of Sciences] in Warsaw. They have just sent us another volume of their journal, Muzyka, a quarterly publication covering topics related to the history and theory of Polish music. Muzyka has been delivered faithfully to the PMC for decades and has served as an important resource for our researchers.

The list of contents of the latest edition (2019/No. 4) can be accessed at: www.ispan.pl/muzyka-20202-contents.pdf and we are delighted to add this volume to our reference library. 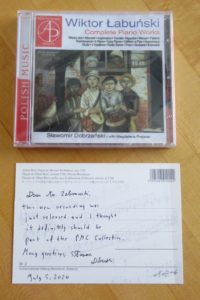 Born in St. Petersburg to a Polish family, Łabuński first studied music in St. Petersburg then relocated to Poland after World War I to study conducting and serve as Dean of Piano studies at the Kraków Conservatory from 1919 until 1928. After arriving in the U.S. in 1928 and making his debut at Carnegie Hall, Łabuński taught at the Nashville Conservatory until 1931 and later moved to Memphis, where he served as professor and director of Memphis College of Music until 1937. From there he moved on to join the piano faculty of the Kansas City Conservatory and, beginning in 1941, served as its director until his retirement 30 years later.

Dr. Dobrzański’s CD contains such solo piano works as Mazurek, Impromptu, Rigaudon, Menuet, and suites of miniatures, such as Patterns, Four Variations (on the famous Paganini Caprice), as well as Six Piano Pieces. Pianist Magdalena Prejsnar joins Dr. Dobrzański in three two-piano works by Łabuński: Poem, Nocturne and his arrangement of Żeleński’s Krakowiak from Suite for Orchestra Op. 47, to round off this CD presentation.

With Łabuński’s solo piano music recorded, now comes the time for his orchestral works, such as the G minor Symphony or Piano Concerto, that still await a world premiere recording. Perhaps Acte Préalable will take up this challenge in the near future. In the meantime, we are very grateful to Dr. Dobrzański for his recording being added to the Polish Music Center’s sound library. 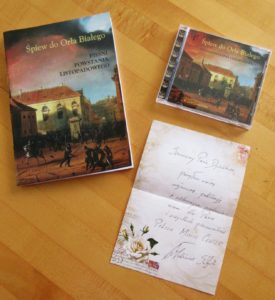 Włodzimierz Sołtysik is another good friend of the PMC and a recent donor of a large number of scores published by his company, Triangiel. His latest gift includes an illustrated songbook, Śpiew do Orła Białego [Songs to the White Eagle], accompanied by a CD recording with a number of songs dating from the November 1830 Uprising in Poland.

Besides a variety of works authored by such well-known composers as Ignacy Feliks Dobrzyński (1807-1867) or Karol Kurpiński (1785-1857), the book and CD set feature several patriotic songs by anonymous composers written to verses by Wincenty Pol (1807-1872), Hieronim Kunaszowski (1806-1885) or Rajnold Suchodolski (1804-1831). Suchodolski’s best-known texts (also represented in musical settings on the CD) include Biała chorągiewka [A White Pennant], Dalej bracia! [Forward, brothers!], and Polonez Kościuszki [Kościuszko’s Polonaise]. Suchodolski sustained severe injuries during the battle at Ostrołęka in May 1831 and was wounded again during the battle for Warsaw in September 1831. When the news of the Russian army’s conquest of Warsaw reached Suchodolski in the hospital, in desperation he tore off his bandages and died of exsanguination.

For anyone researching music of the November Uprising, the Śpiew do Orła Białego album and the CD recording from Mr. Sołtysik will prove to be a truly excellent resource. As always, Polish Music Center will make these items available to all interested scholars, local and worldwide.