Polish-Jewish-Soviet composer Mieczysław Weinberg (1919 – 1996) was familiar with the clarinet from his youth, given its prominent place in klezmer bands and theatre ensembles, and he wrote three works specifically for the instrument. In the Clarinet Concerto he draws a wide range of textures from the accompanying strings, over which the soloist explores the clarinet’s extremes of register in virtuosic fashion. Despite having been written when Weinberg was still in his mid-twenties, the Clarinet Sonata is a mature work with Romantic and folkloric elements. His last completed work was the Chamber Symphony No. 4, an impassioned piece with a wrenching chorale theme and role for obbligato clarinet.

The late 1970s were not a particularly happy time for Mieczysław Weinberg. 1975 not only brought the death of his friend Dmitri Shostakovich, but also several of the dedicated performers of Weinberg’s music had emigrated, and those who stayed in the Soviet Union presented his works less and less frequently. In the face of such adversities, Weinberg nevertheless continued to compose, and in 1977 he returned to the string quartet genre with his String Quartets Nos. 14, 15, and 3 Psalms. These hugely important pieces of Weinberg are performed here with great passion by the Silesian String Quartet and Joanna Freszel. 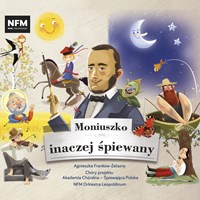 ‘We already know that he was an outstanding composer, the only musician who, while working in a country during the hardest period for the nation, in such adverse conditions, with the strength of his talent and character, stubbornness and perseverance, gained a position of exceptional importance,’ Witold Rudzinski writes in his book about Stanislaw Moniuszko. Due to historical and political circumstances, the artistic achievements of this Polish composer are a special part of the Polish national idiom. His operas (Flis, Halka, The Countess, Paria, The Haunted Manor, Verbum nobile) and songs became an excellent carrier of patriotic content.

Moniuszko’s songs, in terms of quantity, constitutes the vast majority of his oeuvre—he wrote approximately 300. Written to be sung in a parlour, diverse in terms of theme and character (religious, social, moral, lyrical, love, idyllic, historical, patriotic and reflective songs can be found among them) and collected in subsequent volumes of the Songbook for Home Use, which were a response to the needs of society at the time. Moniuszko composed both short strophic songs, intended for amateurs with limited performance capabilities, as well as multi-part ballads created for professional singers. According to Stefan Kisielewski: ‘His music not only came to noble manors or bourgeois houses, but also “to thatched roofs”.’ And because he was an excellent melodist, his songs ‘entered the blood of society, became a part of the climate, atmosphere, Polish lifestyle […].’ Thus, Moniuszko blurred the line between elite and popular art, and was attractive to a wider audience.

Even with his broad appeal, Moniuszko’s works maintained their artistic value. A similar idea guides the project of the National Forum of Music’s Choral Academy [NFM Akademia Chóralna], which aims to propagate singing, including primarily collective singing, which not only has artistic value, but also brings psychological and social benefits. This time, the most famous melodies of Stanislaw Moniuszko were transformed by Roman Ilia Drozd, who translated them into modern language and arranged them for choir, in hopes of increasing their appeal for young performers and audiences. 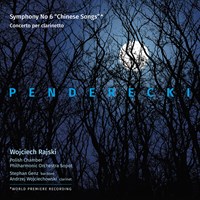 Two musical orders meet in this album: the most broadly conceived music in history and Krzysztof Penderecki. Apart from the opera, the two largest-scale formal orders in the musical art are the symphony and the concerto, which represent the fundamental ideas of co-operation and of competition. Krzysztof Penderecki’s symphonic writing is one of the most important elements of his output as a composer, and possibly the most fascinating one. The composer himself frequently emphasized the autonomous identity of his symphonic oeuvre both in the context of Polish works in this genre and in the broad perspective of Western music. The Clarinet Concerto is a one-movement form, whose clear-cut internal dichotomy is reflected in the sequence of sections: Lento – Vivace – Lento – Vivo – Lento. Two opposed emotional worlds manifest themselves alternately. The ‘sighing’ motif, which looks to Baroque-type rhetoric, is responsible for the somber mood of the first Lento. This is followed by a section of relentless motoric drive (in tempo Vivace), which sounds a bit like a perpetual motion machine. The next Lento, more Romantic than the first one, otherworldly and immaterial, leads to the second scherzo, preceded by a cadenza. The final section rounds off the whole narrative form, with the return of the sighing motif and the orchestra and soloist’s joint ascent to the heavenly heights. Despite the distance of more than 30 years that separates the Clarinet Concerto from Symphony No. 6, the two works are both evidence of a similar turn in Krzysztof Penderecki’s artistic stance – a turn from monumentalism to an intimate and internally lucid type of musical statement.