The year, the Musicology Institute at the Polish Academy of Sciences [PAN] held the Third Annual Conference on the topic of “Polish Music Abroad.” A number of researchers from Poland and the United States gathered to present papers on the subject of “American Dream: Polish Artists on the Other Shore.”

The morning session was followed by papers presented by Sławomir Dobrzański (Kansas State University) and Jolanta Guzy-Pasiak (Art Institute, PAN). Dr. Dobrzański spoke about the American career of pianist and composer Wiktor Łabuński and Dr. Guzy-Pasiak presented a portrait of Karol Rathaus and his activities at City University of New York.

The afternoon session began with Jolanta Byczkowska-Sztaba, who spoke about the little known Chicago composer and conductor, Antoni Małłek. Representing the Polish Music Center, Marek Zebrowski spoke about the symphonic music by Henryk Wars (Henry Vars in the U.S.) and of music by Roman Ryterband, a composer active in Switzerland, Canada and the U.S. but almost completely unknown in Poland. The presentation was illustrated by scanned scores, photographs, concert programs, correspondence and other historical artifacts held in the PMC’s Vars and Ryterband Collections.

The presentations continued with Barbara Mielcarek-Krzyżanowska (Bydgoszcz Music University), who spoke about Zygmunt Mycielski’s visits to California and works written there. Violetta Kostka (Moniuszko Music Academy) delivered the closing presentation on the reception of Paweł Szymański’s music in the United States.

Each of these fascinating topics elicited a number of interesting questions that often grew into extended discussions and exchanging of information between the conference attendees. It was agreed that the topic of surveying and documenting the accomplishments of Polish composers on the other side of Atlantic is certainly worthy of continued pursuit by the academic community. 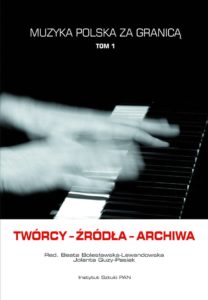 The Art Institute of PAN had already published two volumes in the series of “Polish Music Abroad.” Volume One—Twórcy-źródła-archiwa [Composers-Sources-Archives], edited by Beata Bolesławska-Lewandowska and Jolanta Guzy-Pasiak—came out in 2017. Volume Two—Między Warszawą a Paryżem (1918-1939) [Between Warsaw and Paris (1918-1939)], also edited by these two scholars—came out in print earlier this year. Both volumes can be ordered online at iswydawnictwo@ispan.pl.