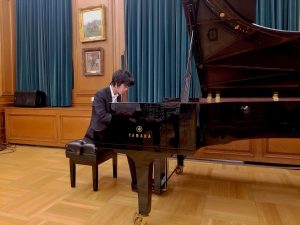 The semi-finals were held on Saturday, March 30 and from a dozen contestants, seven were selected to compete in the final round on March 31. The finalists presented demanding 45-minute programs, featuring one of the Chopin Sonatas as well as selected mazurkas by Chopin and Szymanowski. After long deliberations, the jury reached a decision to award the First Prize (ten thousand dollars and a gold medal) to the Japanese-born pianist Takeshi Nagayasu. Nagayasu will also be invited to perform at the Paderewski Festival in Paso Robles, California, give a recital at the Consulate General of the Republic of Poland in New York City and participate as a scholarship recipient at the International Keyboard Institute and Festival in New York City this summer. 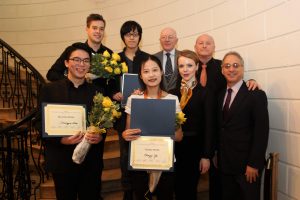 The Second Prize (five thousand dollars) went to a Korean-born pianist, Seungjin Han who also swept additional prizes for best performances of compositions by Paderewski and Szymanowski. The Third Prize (three thousand dollars) was given to a student from China, Hengyi Ye.

Jury President, Dr. Baczewska, praised the general level of this year’s Competition and also announced an additional prize, Honorable Mention, that was given to Philip Kwoka, an American pianist of Polish descent and Executive Director of the Bronx Conservatory of Music. In her press briefing immediately following the award ceremony, Dr. Baczewska noted that Mr. Kwoka’s insightful interpretations of Chopin convinced the jury to make an exception and award the extra prize on this occasion.

Continuing a tradition of success 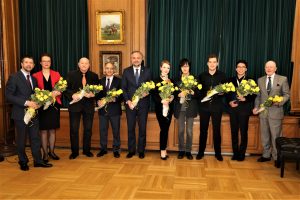 Present at the Chopin Competition’s conclusion was Marek Skulimowski, President of the Kosciuszko Foundation (pictured at left – far left corner), who spoke of the long tradition of this competition and its illustrious winners, including among others the legendary Van Cliburn. The important role of the Kosciuszko Foundation as the center for Polish Culture in North America and the universality of Chopin’s music was also underlined in the remarks delivered by the Honorable Maciej Golubiewski, Consul General of the Republic of Poland in New York (pictured at left – center).

A reception for the artists, jurors and the public followed the award ceremony, giving everyone—the young artists, jurors and the public who faithfully attended the day-long auditions throughout the weekend—a chance to relax and enjoy exchanging a few impressions of this very successful event. One must also mention the wonderful organizers led by Kosciuszko Foundation’s Ewa Zadworna, Director of Cultural Affairs (pictured at left – second from left), who with her staff took great care of every contestant’s and juror’s needs and made sure that all logistical matters were dealt with in a timely and professional manner.

Bravo to the winners and to the Kosciuszko Foundation for maintaining the long and illustrious tradition of this competition. May it continue in the years to come!