The centenary of Poland’s regained independence was celebrated in Calgary, Canada, with a weekend of concerts, lectures, film screenings, historical and art exhibits, folk dancing, copious culinary treats available at long tables and traditional drinks dispensed at the two bars, alongside many other attractions. Held October 26-28 at the Polish-Canadian Cultural Centre in Calgary, a modern and impressive building with two large auditoria and suites of service rooms and offices, the celebrations highlighted the significant cultural and social presence of Polonia settled in Alberta. It also demonstrated their commendable organizing talents and strong commitment to preserving their Polish heritage on a foreign soil.

All events, lectures and film screenings were presented in English and attracted large crowds that were not exclusively Polish. For this festival at least, the Polish-Canadian Cultural Centre hosted a number of Lithuanians, Ukrainians and other Central European nations as well as significant number of other immigrants from Asian and African continents. Outreach with an attractive presentation of Poles and Poland to many other nationalities could be counted among the many successes of this joyous celebration. 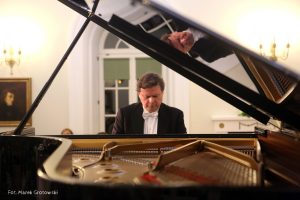 Observations of Poland’s centenary as a modern republic came to a formal close with a recital by pianist Krzysztof Jabłoński, laureate of the 1985 Chopin Competition and resident of Calgary since 1998. His choice of Paderewski’s three best-known works (Menuet and Cracovienne fantastique from Op. 14 and Légende from Op. 16) was followed by such Chopin warhorses as Polonaises Op. 44 and 53, Ballade Op. 23 and Scherzo Op. 31. The capacity crowd gave the artist a prolonged standing ovation, eliciting a posthumous C-sharp minor Nocturne as an encore.

Other events in the long weekend lineup included films (BBC documentary Struggles for Poland, Andrzej Wajda’s Ashes and Diamonds and The Courage of Knowledge, a biopic about Marie Curie) and such lectures as Peter Hetherington’s For Our Freedom and Yours, Marek Hatlof’s Celebrating the first 100 Years of Polish Cinema and Polish Film After 1995, and PMC Director Marek Zebrowski’s Through Music to Freedom: Paderewski and World Politics. Dir. Zebrowski also presented short recitals of Paderewski’s solo piano works following his two lectures. With their lively presentations in authentic regional costumes, the Mazovia Polish Song and Dance Association and the Krakusy Polish Folk Dance Association added a colorful note to this very successful festival. Organized by the local Polonia leaders under the auspices of Poland’s honorary consul in Calgary, the celebrations were also attended by Poland’s Deputy Chief of Mission from Ottawa and a Polish Consul from Vancouver.