The International Lutosławski Cello Competition in Warsaw is the first and still the only competition in Poland where the complete portfolio of cello works by Lutosławski are included in the repertoire. Running since 1997, the 11th edition of the Competition takes place January 29 – February 10 at the National Philharmonic Hall. Rounds 1 and 2 will be open to the public, followed by a Final Round to be performed with orchestra. A total amount of no less than €25,000 will be distributed by the jury among prize winners, who were during the Concert of Laureates on February 10, 2018.

Special Prizes For The Best Performance Of: 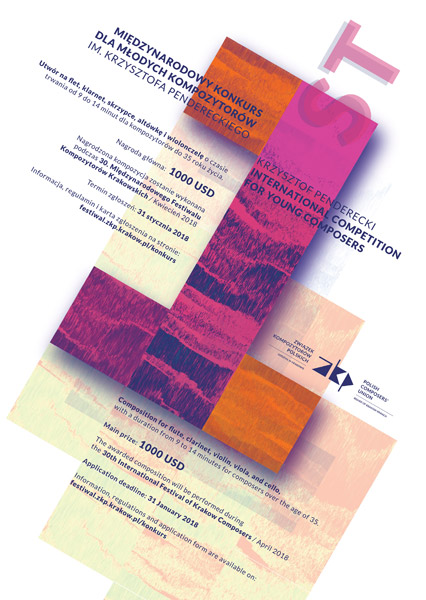 The results of the 1st Krzysztof Penderecki International Competition for Young Composers are in! The jury—presided over by Marcel Chyrzyński, head of the Polish Composers’ Union, Kraków Branch that organized the Competition—also included Zbigniew Bargielski, Ivan Buffa, and Wojciech Widłak. The jurors met in Kraków on February 15 to evaluate twenty scores submitted for the Competition from all over the world, including Australia, China, Greece, Germany, Hong Kong, Japan, Lithuania, Norway, Poland, United Kingdom and Ukraine. Three entries were disqualified for not meeting the Competition’s regulations. From among the remaining seventeen eligible submissions, the following awards were granted:

The world premiere of Papaioannu’s Quintet in Five Scenes will be given by the Quasars Ensemble from Slovakia on April 18, 2018 at the Florianka Hall in Kraków during the Thirtieth Festival of Kraków Composers.