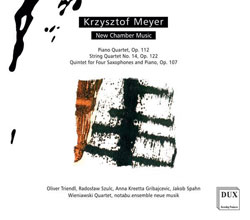 Released in the past few months, these new recordings by DUX records feature large works for choir and orchestra as well as some of the newest chamber works by Krzysztof Meyer. A student of Stanislaw Wiechowicz, Krzysztof Penderecki and Nadia Boulanger, Meyer is a highly lauded composer, receiving an honorable mention at the UNESCO International Rostrum of Composers in Paris as well as the Officer Order of Polonia Restituta from the government of Poland, among other awards. He is also a sought-after pedagogue who recently retired from the Hochschule für Musik in Cologne, and a well-regarded writer and biographer.