On 4 August, the Polish Orchestra Sinfonia Iuventus and Warner Classics presented the newest album titled  Polish Music for Piano and Orchestra. Polish piano concertos of the neo-Romantic era are scarce and most of them remain forgotten (also due to the lack of performing editions). Piano Concerto in A minor by Paderewski, which is a relatively frequently presented piece (and is also included in the album) was for long an exception to this rule. Only recently, one could have observed an increasing interest in those compositions and the merits of the British pianist Jonathan Plowright cannot be underestimated – the virtuoso, who displays brilliant technical skills, has also a soul of a bold explorer of unknown repertoire. He raised from the dead a number of magnificent works, including piano concertos by Stojowski, Melcer, Żeleński, Zarzycki, and recently also Różycki. He is also seen as an excellent interpreter of Paderewski who stood at the beginning of Plowright’s great adventure with Polish music. The conductor of the newest album, Łukasz Borowicz, has similar interests. Some of his remarkable achievements include the performances and recordings of forgotten Polish operas (Flis by Stanisław Moniuszko, The Legend of the Baltic by Feliks Nowowiejski, Homeless Swallow by Szymon Laks, Maria by Roman Statkowski, The Adventure of King Arthur by Grażyna Bacewicz, Monbar or the Filibusters by Ignacy Feliks Dobrzyński, and others).

The two artists have joined forces to present, along with a popular, relatively new and full-of-youthful-passion concert by Paderewski, a work which has remained almost unknown, but is incredibly beautiful, interesting and valuable: Symphonic Rhapsody for Piano and Orchestra by Zygmunt Stojowski. After a short period of private tuition with Władysław Żeleński in Warsaw, this Neo-Romantic composer continued to study in Paris with such prominent figures as Léo Delibes, Jules Massenet, and Camille Saint-Saëns. He also attended piano masterclasses with Paderewski, who became his long-time friend and companion in life in exile. Stojowski’s greatest achievements as a composer, a pianist, and, first and foremost, an esteemed teacher came during the four decades he spent in the USA (since 1905 until his death in 1946). There, he always was among the most devoted ambassadors of Polish affairs and his homeland’s culture. Although highly valued and popular in the United States, the artist was long forgotten in his homeland. It has been only in recent years that we have observed a renaissance of the beautiful and valuable, post-Romantic works by Stojowski, although recordings and concert programmes include only a tiny excerpt from his abundant oeuvre.

Symphonic Rhapsody for Piano and Orchestra, presented on the album, was composed in 1898–1900. It was published with a dedication for the British American pianist Harold Bauer, who also happened to be a student of Paderewski. After a successful world premiere in Berlin in 1900 (Berliner Philharmoniker, con. Josef Řebíček), the Rhapsody for many years remained one of the most popular works in the repertoire of Stojowski himself and other pianists. Most probably, it was the same piece as the Polish Fantasy, presented in Warsaw not long after the premiere. The alternative title reveals the composer’s intentions. They are easy to decipher in the music itself, however the stylisations of national motifs are very subtle. The term “rhapsody” indicates usually a freely-shaped form with traits of epic and heroism, which is true also in this case. Following a general pattern of a sonata form, the work amazes with the richness of changeable moods, the colours of the orchestration (its delicate shade seems to echo the studies with the Parisian masters) and the brilliant virtuosity of the solo part, which serves the purpose of expression, rather than a sole show of skill. 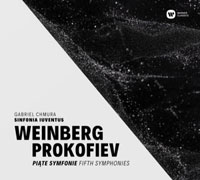 Prokofiev and the Polish-born Weinberg experienced both the authorities’ favour and persecution. Their works reflect the concessions they made to the oppressive doctrine, but also their (mostly allusive) opposition to that doctrine. History has given them justice, and the true beauty of their music has stood the test of time. Liberated from the ideological context of those dark times, their works continue to delight audiences around the world. While Prokofiev’s fame has been well established for decades, the music of Mieczysław Weinberg (widely regarded as the third great Soviet composer alongside his close friend Shostakovich, and Prokofiev) has only recently experienced a renaissance – especially in the composer’s native Poland, which he always considered his home.

The Orchestra is a veritable geyser of energy – a robust sound imbued with youthful power combined with intensive emotions and lightness of phrase. The programme of the album consists of two 5th Symphonies – in F Minor Op. 76 by Mieczysław Weinberg and in B-Flat Minor Op. 100 by Sergey Prokofiev.