The people of Poland have lived through often impossible conditions over the last three centuries, and this album is Polish-American composer Mark Nowakowski’s tribute to their spirit of survival. Songs of Forgiveness is both a meditation on anger and grief and a lamentation on the stark realities of a society riven by tragedy. Blood, Forgotten is a multimedia memorial for the victims of Nazi and Soviet aggression during World War II, the electronic soundtrack using sounds from an instrument that survived one of the concentration camps. Partly written as a memorial for Henryk Górecki, Grandfather Songs also includes the surreal element of a recording of Nowakowski’s family singing the war song Hej Ulani.

A similar recording to know about… 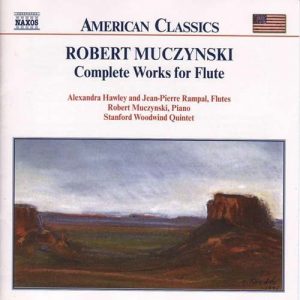 Considered one of the most distinguished American neo-Classical composers of his generation, Robert Muczynski (1929 – 2010) was a Polish-American born in Chicago. Muczynski studied composition with Alexander Tcherepnin at DePaul University in the late 1940s. Described by Fanfare as “…one of our country’s best composers,” he made his Carnegie Hall debut at 29, performing a program of his own compositions for piano. His Sonata for Flute and Piano received the Concours Internationale Prize in Nice, France, in 1961 and is now unanimously regarded by audiences, critics, and performers as an important addition to the flute repertoire.