Under the direction of its Chief Conductor Alexander Liebreich, the National Symphony Orchestra of Polish Radio (NOSPR) releases the final recording of a three part cycle of works by influential composers, featuring compositions by Karol Szymanowski and Witold Lutoslawski. Next to the ecstatic Concert Overture in E major, Op. 12, an early work by Szymanowski, the NOSPR performs Lutosławski’s contemplative and yet excessive Symphony No. 4, a work that the composer finished shortly before his death in 1994. Gautier Capuçon, one of the leading cellists of his generation, is the impressive soloist in the Concerto for Cello and Orchestra (probably the most famous work of Lutosławski). His “powerful and concentrated” performance alongside NOSPR is praised by classical journalist Remy Franck of Pizzicato, who deems the album as “one of the best concerto recordings [he had] ever heard.”  Franck’s full review can be found here. 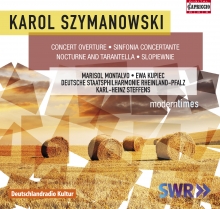 Karol Szymanowski ranks as one of the few composers thoroughly familiar to pundits, but whose works were all too often ousted from the concert repertoire by more popular contempories. A clear ‘progression’ can be discerned in Szymanowski’s musical development, where he was influenced by late Romantcism in his earliest works and Impressionism after the middle of the First World War (i.e. the time of his return home). From the works of this period on, he still remained committed to tonality, but goes to its very limits. Moreover, the orchestral works are usually accompanied by a lush and beguiling ecstasy of colours paralled most likely in the music by Alexander Scriabin.