Donate $100 or more today – the first 25 donors at this level will receive an exclusive 2018 PMC calendar featuring rare historical photos from our Paderewski Archive, celebrating the centenary of Poland’s independence. Please visit https://giveto.usc.edu and find the PMC checkbox under University-wide Giving Opportunities > Centers and Institutes > Music.

Thank you for considering this appeal. As in the past, we are sending our annual letter to let you know what we have accomplished at the Polish Music Center and to ask you for your generous support, which is the lifeblood of everything we do. You may already know some of the highlights after attending our concerts and festivals or reading our online Newsletters, where we have shared the latest developments with our worldwide audience. Nonetheless, here are some of our most important milestones that occurred since our letter to you last December.

PMC Director Marek Zebrowski was in Poland at the end of last year for lectures, master classes and concerts. While in Warsaw to present at the conference of Music Libraries in Poland, he also gave interviews for TVP Kulturalni and Halo Polonia, discussing concerts at Teatr Nowy and Łazienki Palace where music by Henryk Wars, Roman Ryterband, and Zygmunt Stojowski from the PMC’s Archival Collections was performed. Dir. Zebrowski also spoke at a Kraków Music Academy conference on Paderewski’s concert repertoire, highlighting programs from our Collection, and performed Tadeusz Majerski’s little-known Piano Quintet with the Messages Quartet in Florianka Hall. Finishing his busy visit in Poland, Dir. Zebrowski lectured on Paderewski for the Senate of the Republic of Poland and performed in recital at the Belvedere Presidential Palace. See the January 2017 Newsletter for details

In January 2017, the PMC and Dir. Zebrowski collaborated with Brazil-based cellist Lars Hoefs to present music by Chopin, Paderewski and Villa-Lobos at Pasadena Presbyterian Church concert series, and in February (also with Lars Hoefs) Dir. Zebrowski performed works by Chopin, Paderewski and Villa-Lobos for the LA Musical Salon. March was also a busy month with the PMC Spring Concert at Newman Hall, featuring music by Polish avant-garde composers in performance by the highly acclaimed gnarwhallaby ensemble. At that concert, we also launched our online “Website Reboot Campaign” that successfully raised funds needed for a complete redesign of the PMC website, which is currently underway.

Later last spring, Dir. Zebrowski had talks with music publishers in Berlin, performed Wars’s Piano Concerto with the Gorzów Philharmonic, and met with directors of the State Archives in Warsaw. In mid-May the PMC was also instrumental in organizing a series of meetings between the Kraków Music Academy and USC Thornton School of Music Dean, Dr. Robert Cutietta, which laid preliminary groundwork for academic exchange programs between USC and the Academy. 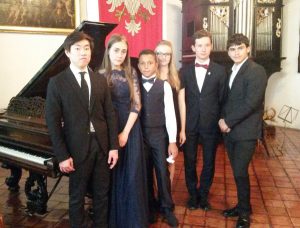 The summer began with the Youth Cultural Exchange Program between the Paderewski Festival in Paso Robles and the Province of Tarnów in Poland. Two young pianists from the Central Coast joined their peers from Poland and Ukraine for a week of intensive workshops and master classes at Paderewski’s manor house in Kąśna Dolna in late June. In partnership with the Kraków-based Academy of Young Talents, Dębno Castle, and our biennial sponsor, the Paderewski Institute of Musicology at the Jagiellonian University in Kraków, during the first week of July this group of young piano students appeared in joint concerts at Łącko, Dębno and Kraków. Later on, the young American pianists continued on to Warsaw to perform at the Steinway Salon, visit Chopin’s birthplace in Żelazowa Wola and tour the Chopin Museum in Warsaw. The entire program was coordinated by the PMC with Dir. Zebrowski, cellist Lars Hoefs and Ukrainian-Polish pianist Marianna Humetska providing faculty guidance and instruction. 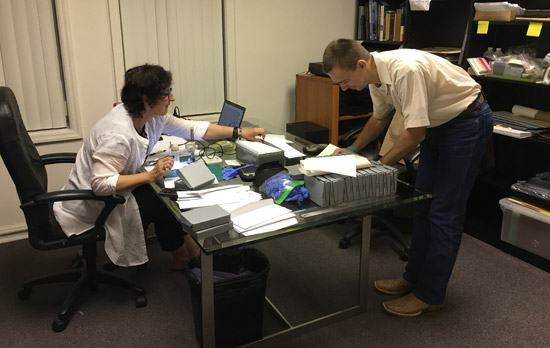 The months of July and August at the PMC were devoted to working alongside two experts from the State Archives in Warsaw—Dr. Robert Górski and Anna Czajka. The former, a Paderewski specialist, continued to catalogue and describe unique photographs, negatives, and documents in our “Paderewski Archive: the Paso Robles Collection.” The latter, a world-class preservation expert, worked on protecting our Paderewski and Stojowski Collections, mending books and musical scores and preserving manuscripts, images, and other documents in special packaging materials procured for us from the Beskid Company by the State Archives. See the August 2017 Newletter for details

This year the PMC also initiated cooperation with the LA Museum of the Holocaust to present concerts of music from our collections of manuscripts. In May we staged a concert of music by Roman Ryterband given by local artists, and in late August music by Henryk Wars was performed by pianist Kuba Stankiewicz and bassist Darek Oleszkiewicz, commemorating the composer’s 40th death anniversary. For both concerts, members of the composers’ families were on hand to enjoy the music. 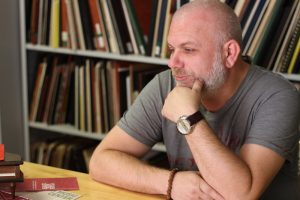 The Fall season opened with the PMC’s flagship event, the 2017 Paderewski Lecture-Recital in October, featuring music by Marcel Chyrzyński—Head of Composition Studies at the Kraków Music Academy and President of the Kraków chapter of the Polish Composers’ Union. As a special gesture, Dr. Chyrzyński composed a chamber work for clarinet, cello and piano that was world-premiered at this concert. Dedicated to the Polish Music Center and instantly published by Polish Music Editions (PWM), this score is the latest addition to our fine music library. The featured performers for the October concert at USC, the world-famous Cracow Duo, also appeared at LACMA and in San Diego, Pasadena, San Francisco, Paso Robles, Chicago and New York, with the PMC coordinating all of the Cracow Duo’s concerts all the U.S. this fall. See the October 2017 Newsletter for a review

The other big item on the PMC calendar was the annual Paderewski Festival in Paso Robles. Each year we contract artists, coordinate logistics, write press releases and biographies, and contribute to designing and editing the Festival program booklet. This year’s Paderewski Festival was a great success with programs including “American Jazz Standards by Polish Composers,” winners of the Youth Competition and a Gala Recital by pianist Magdalena Baczewska with repertoire of Chopin, Paderewski and Szymanowski. Also this year, in cooperation with the Adam Mickiewicz Institute, we were able to introduce Festival patrons to the finalists in the “Paderewski Cycle” musical theater project, who performed selections from their treatments and shared their ideas about creating this exciting project. See the November 2017 Newsletter for a recap

All these initiatives aside, throughout the past twelve months we have answered countless inquiries, hosted several scholars from across the U.S. and Poland, worked on the monthly Newsletter with our student workers and volunteers, continued to transfer our website pages to the new design template, scanned over a thousand photos and negatives from our Paderewski and Stojowski Collections, and much more. Each of the past 52 weeks went by all too quickly, with more and more to do in the coming days and months in order to keep up and fulfill our mission.

Speaking of plans for 2018… Two of our big concerts—the spring concert on March 24 and the Paderewski Lecture-Recital in October 14—will be devoted to celebrating the centenary of Poland’s independence. The March concert will present music of the ‘Młoda Polska’ era composers, and the October event will focus on music composed during the inter-war period, featuring USC Thornton’s own Polish musicology specialist, Dr. Lisa Cooper Vest. Dir. Zebrowski will present several lectures on “Paderewski and World Politics” at the Los Angeles Public Library (January), Forum on Polish History in Washington, DC (January), University of Washington, Seattle (March), and in Lyon and Toulouse, France (June). Another Paderewski-related initiative—organized jointly with the State Archives in Warsaw—will be the creation of a touring exhibit about Paderewski, featuring rare photographs from the PMC’s Paderewski Archive with Polish and English texts. Not to forget other musical projects, we will also continue our cooperation with the Los Angeles Museum of the Holocaust by presenting music by Mieczysław Weinberg (February) and Bronisław Kaper (April). 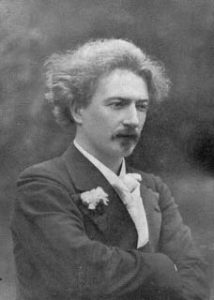 Such an ambitious program can be realized only with your generous support of our annual budget, which we solicit only once a year. Many of our fixed costs include renting USC venues, hiring performers, printing program booklets, and promoting concerts, as well as hiring student help, supporting researchers worldwide, maintaining and updating our vast website, and covering costs for visiting scholars. As always, we are very grateful to all those who have supported us financially, attended concerts, volunteered at events, assisted in our library, or spread the good word about us. We know how important our one-of-a-kind Center is to our Polish-American community and beyond, and how its continued mission enriches the cultural landscape of California and the world. Therefore, each year we ask you to consider making a fully tax-deductible gift to support the institution whose innovative projects have advanced Polish music and culture for over thirty years. As always, your gift will be recognized in our concert program booklets throughout the year. Also, the first 25 donations of $100 or more will receive a complimentary 2018 PMC calendar created in celebration of the centenary of Poland’s independence, richly illustrated with rare historical photos from our Paderewski Archive.

To donate by credit card, please visit https://giveto.usc.edu—you will find a PMC checkbox under University-wide Giving Opportunities > Centers and Institutes > Music. You may also call us at (213) 821-1356 to give by phone. Checks may also be mailed to: 840 W. 34th St., Los Angeles, CA 90089-0851. Please indicate “USC Polish Music Center,” either in the remittance line of your check or in the online form, to ensure that your contribution is routed directly to our department. Your donation to our non-profit is tax deductible, as USC is 501c3 institution.

As always, we invite you to stop by the Polish Music Center to experience the impact of our exceptional programs and learn more about how your year-end gift can advance the profile of Polish music around the world. Please call us at (213) 821-1356 or email polmusic@usc.edu if you have any questions or to schedule a visit.

Thank you for your consideration. With our best wishes for the Holidays, we remain sincerely and gratefully yours,