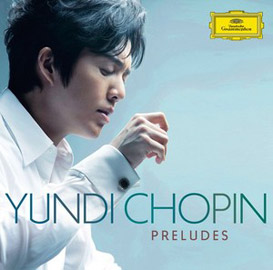 Following the release of his Deutsche Grammophon recordings of Chopin’s 24 Preludes (DG 028948119103, Sept. 2015)and Chopin’s Ballades 1-4, Berceuse and 4 Mazurkas (DG 028948124435, Feb. 2016), Chinese pianist and youngest-ever winner of the Chopin Competition in Warsaw Yundi Li took his Chopin repertoire on a multi-city Asian tour in November 2015 – January 2016. Starting with venues in Seoul, South Korea, he then played recitals and orchestral concerts in the Japanese cities of Yokohama, Tokyo and Nagoya, and concluded with a series of recitals in cities across China: Wuhan, Chonqing, Hangzhou, Huizhou, Dongguan, and Hefei.

Then on February 21, Yundi kicked off his 2016 international Chopin recital tour of the US and Europe with a performance at Walt Disney Concert Hall in Los Angeles (read a review at the Los Angeles Times). Followed by stops at London’s Royal Festival Hall, Vienna’s Konzerthaus, Moscow’s Barvikha Concert Hall, Vienna’s Konzerthaus, New York’s Carnegie Hall, and London’s Royal Festival Hall, Yundi has been sharing his characteristic “sovereign technique” (New York Times) to audiences around the world. Following a sold-out concert at Carnegie Hall, the New York Times raved about Yundi’s performance of Chopin: “he showed off a graduated array of colors and moods, including moments of understated simplicity and tenderness.” The internationally acclaimed pianist performed next in Moscow at the Barvikha Concert Hall on March 31, and at Stuttgart’s Liederhaal Mozartsaal on April 2. After Germany, Yundi performed in the Ankara Festival in Turkey, followed by concerts in Paris and London, and finished his tour with a recital in Fribourg, Switzerland.