“Kalinowski and Szlezer, friends since childhood, have a wonderfully natural rapport and there is an arresting quality to their playing that gives life to the music”—The Strad

From April 27-29, the Universidade Estadual de Campinas in São Paulo, Brazil hosted the first annual Festival de Musica Polonesa [Polish Music Festival], this year honoring composer Aleksander Tansman (1897-1986) and featuring the Cracow Duo.  After the Festival, featured guests pianist Marek Szlezer  and cellist Jan Kalinowski of the Cracow Duo will give travel on to give several concerts in Brazil and Argentina. USC Thornton School of Music alumnus, cellist Lars Hoefs, is the Artistic Director of the Festival, and Culture.pl is a partner of these events. 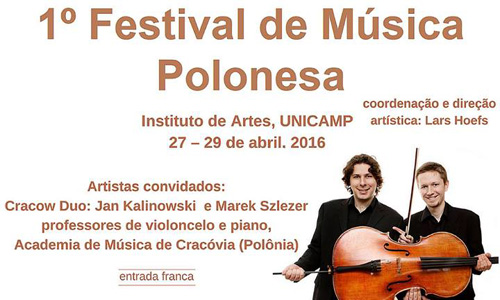 The three-day Polish Music Festival at the Institute of Arts of Universidade Estadual de Campinas, one of the most prestigious universities in South America and commonly known as the Unicamp, will feature not only the compositions of its patron – Aleksander Tansman. Brazilian audiences will also have a chance to listen to works by Fryderyk Chopin, Ludomir Różycki and Zygmunt Stojowski. The festival will also include a lecture on “Polish music after 2000 and the Cracow School of Composition,” which will be complemented by a concert of contemporary music featuring compositions by Tomasz Jakub Opałka, Marcel Chyrzyński, Krzysztof Meyer, Witold Lutosławski, Krzysztof Penderecki and Wojciech Widłak.

In addition their performances at the new Polish Music Festival, the Cracow Duo continued their South American tour with concerts elsewhere in Brazil and in Argentina. On May 2 they performed works by Stojowski, Chopin and Tansman at the Ambassador’s residence in Brasilia. On May 3, they take the stage in Curitiba, Brazil to perform works by Chopin and Tansman, in collaboration with the Consulate General of the Republic of Poland the city of Kraków (sister city of Curitiba). And on May 6 and 7, they perform works by Chopin, Tansman, Ginastera and Piazolla in Buenos Aires at the Museo de Arte Hispanoamericano Isaac Fernández Blanco, in collaboration with the Polish embassy.