The late Henryk Mikołaj Górecki’s Symphony No. 4 “Tansman Episody”— the final version was orchestrated by Górecki’s son, Mikolaj Górecki—had its US Premiere on Jan 16-18, 2015 by the Los Angeles Philharmonic at Walt Disney Concert Hall, led by maestro Andrey Boreyko with violin soloist Nikolaj Znaider. The World Premiere of Górecki’s Symphony No. 4 was performed by the London Philharmonic with violinist Julian Rachlin and maestro Boreyko in the Royal Festival Hall in London on April 12, 2014, and the Polish Premiere was given by Mirosław Jacek Błaszczyk and the Henryk Mikołaj Górecki Silesian Philharmonic in the concert hall of the Łódź Philharmonic on February 15, 2015. Read a review of the L.A performance in the Feb 2015 Newsletter.

On Jan 25, the San Francisco Contemporary Music Players [SFCMP] performed the World Premiere of Polish composer and vocalist Agata Zubel’s new chamber piece, entitled Where To in Berkeley, CA. It was second concert in the ensemble’s Project Ten Fourteen— series of four programs featuring world premieres simultaneously commissioned from ten distinctive composers all challenged to reflect upon and address the human condition, common to us all.

On Feb 13, the World Premiere of ocean is not enough for 13 performers by Wojtek Blecharz was given by the Klangforum Wien, conducted by Clemont Power. This new work by Blecharz was commissioned as a part of Klangforum’s “impuls” program, and the premiere took place during the impuls Festival 2015.

The Moniuszko Grand Theatre in Poznań commissioned a new opera by Aleksander Nowak, Space Opera, czyli mężczyzna, kobieta i…. [Space Opera, or a Man, a Woman, and…], which was premiered in Poznań on March 14, 2015 in conjunction with the International Opera Conference.

Access Contemporary Music (ACM), the Polish Consulate and 98.7 WFMT celebrated the vibrant legacy of Polish classical music in Chicago with a concert entitled Composer Alive: Poland on April 10, featuring the Premiere of Agnieszka Stulgińska’s Dance With my Breath performed by ACM’s Palomar Ensemble. Also on the program: Moon Flowers by Marta Ptaszyńska, In C by Marcel Chyrzyński, Quartet for Clarinet and String Trio by Krzysztof Penderecki, Seven One Minute Waltzes by Alicja Gronau, Shades of Ice by Agata Zubel and Quatour pour la naissance by Zygmunt Krauze.

From April 17-19, 2015, the Polish National Radio Symphony Orchestra (NOSPR) hosted the 6th edition of its Festival of Premieres of Polish Modern Music in Katowice, giving World Premieres to almost 30 new pieces by Polish composers of various generations. To read the full listing, visit our April 2015 Newsletter.

Organized by the Warsaw branch of the Polish Composers’ Union (ZKP), the 29th edition of the Warszawskie Spotkania Muzyczne [Warsaw Music Encounters] was held from May 9-15, and included the World Premieres of 16 new works by Polish composers. See the full list of works in our May 2015 Newsletter. 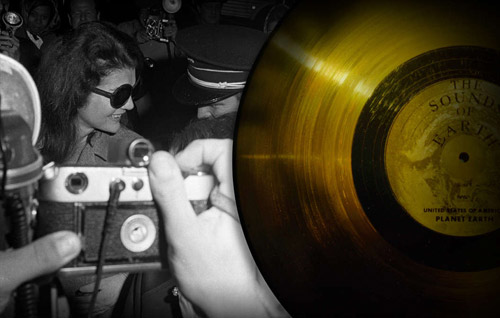 The third edition of the hottest young Polish creators in the Teatr Wielki – Polish National Opera’s Project ‘P’ series had its world premiere on May 22, 2015. The latest composers commissioned in this series are Katarzyna Głowicka(Requiem for an Icon) and Sławomir Kupczak(Voyager).

A new work by Canadian-Polish composer Piotr Grella-Mozejko entitled …only Midnight… per due pianoforti (2009) had its world premiere in Edmonton, Canada on May 22, performed by the dedicatees: the husband-wife piano duo of Mikolaj Warszynski and Zuzana Simurdova. It was also the North American launch of pianist Warszynski’s latest Anima Records release, Mikolaj Warszynski – Piano Solo. 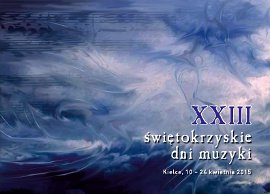 Held in Kielce April 10-24, the Świętokrzyskie Music Days Festival was dedicated to new and rediscovered music. Two World Premieres of works commissioned by the Kielce Philharmonic were presented—Figury na piasku [Figures Drawn on Sand] for flute quartet by Grażyna Pstrokońska-Nawratil and Ideograms for Orchestraby Rafał Zapała, who is also the composer-in-residence for the current season of the Kielce Philharmonic—as well as a new work by Krzesimir Dębski.

The Gaude Mater International Festival of Sacred Music (April 20 – May 8) celebrated its 25th anniversary with the World Premiere of Missa pro Maria for soprano, bass, trombone, organ and mixed choir by Aldona Nawrocka, and the Polish Premiere of the Symphony No. 3 “Symphony of Angels” by Paweł Łukaszewski

The International Festival of Kraków Composers (formerly known as Days of Music by Kraków Composers) was held from April 18-26 and featured World Premieres by 16 Polish composers. See the full listing in the June 2015 Newsletter.

The 6th edition of the KODY [CODES]—the Festival of Traditional and Avant-garde Music—featured the Polish premiere of three works commissioned by the Festival by young Polish composers: Krzysztof WOŁEK – Błoto / Mud (2015), JarosławSIWIŃSKI – Timecode (2015) and Artur ZAGAJEWSKI – Woodcuts (2015), performed by the US ensemble Bang on a Can on May 17.

On May 19, the National Philharmonic in Warsaw presented the concert “Zygmunt Krauze – A Composer Portrait,” highlighting the oeuvre of one of the most original Polish modern composers as well as that of two of his students: World Premieres by Wojciech Błażejczyk’s Muzyka strun and Marcin Stańczyk’s Posłuchy were also heard. 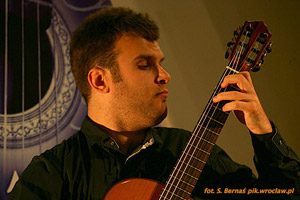 Polish guitarist Łukasz Kuropaczewski performed the world premiere of the new solo guitar work Triptych by Krzysztof Meyer on July 23 at the Caramoor Center for Music and the Artsin New York.

On September 4, the World Premiere of Wojtek Blecharz’s Counter-Earth, commissioned by the Bendigo International Festival of Exploratory Music (BIFEM) for clarinetist Aviva Endean, was performed in Australia.

The World Premiere of the revised version of Lella, a secular oratorio originally composed in 2011 by Joanna Bruzdowicz, was given during the 15th International Festival of Music in Catalonia (Aug 20-23, Céret, France), for which Bruzdowicz serves as the Artistic Director. It was conducted by the composer, with mezzo-soprano Liliana Górska in the lead role and the Neo Quartet from Gdańsk serving as the core of the small instrumental ensemble.

On October 4, a new piece by Marcin Stańczykentitled Blind Walk was premiered at La Biennale di Venezia in Venice, Italy by Ensemble Musikfabrik, under the direction of Johannes Schöllhorn. 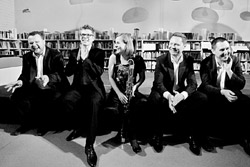 On October 24, the LutosAir Quintet performed the World Premieres of two new pieces by young Polish composers: Wojtek Blecharz – Hour/Plateau for wind quintet, space, light and video (2015) and Piotr Ślęczek – A Song of the New Order (2015). The concert was held in the Manggha Muzeum during the HMG Festival in Warsaw.

On November 4, the last known composition of Henryk Mikołaj Górecki, Sanctus Adalbertus, had its World Premiere in Kraków at the ICE Congress Centre. The Górecki premiere as well as the premiere of the celebratory Fanfara by Paweł Mykietyn, which was composed especially for this occasion, crowned the celebrations of the 70th anniversary of PWM Edition. Performers: Wioletta Chodowicz – soprano, Artur Ruciński – baritone, the Polish Radio Choir and Kraków Philharmonic Choir, and Polish National Radio Symphony Orchestra with Jacek Kaspszyk – conductor. 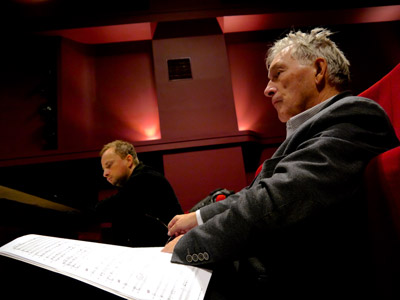 Olimpia z Gdańska [Olympia of Gdańsk], a new opera by Polish composer Zygmunt Krauze, will be presented by the Opera Bałtycka in Gdańsk in its World Premiere performance on November 20. The main performers are Anna Mikołajczyk (Stanisława), Jan Monowid (Robespierre), and Monika Ledzion (Olimpia). At right, the composer watches rehearsals with Director Jerzy Lech in the background.

A new choral piece by Paweł Łukaszewski—Veni Sancte Spiritus for Two Unaccompanied Mixed Choirs, dedicated to the memory of Henryk Mikołaj Górecki—was performed by the orchestra and choir of the Kraków Philharmonic for the first time on October 2 at an oratory concert at Kraków Philharmonic Hall.

The Polish Composers’ Union (ZKP)continued to celebrate its 70th anniversary with its annual concert series, Portraits of Composers, focused this year on works by two contemporary Polish composers – Piotr Komorowski and Sławomir Zamuszko. On Dec 7 at the Mazovia Institute of Culture, the World Premiere of two of Komorowski’s works—Sonata for cello and piano and Hidden World for accordion and electronics—were performed by Stanisław Miłek (accordion), Julia Samojło (piano), Tomasz Strahl (cello), Łucja Szablewska-Borzykowska (mezzosoprano), Flute O’Clock and the Opium Quartet. 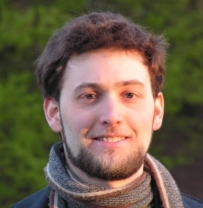 The world premiere of Pawel Przezwanski’s latest piece, Immer-ten-sion for orchestra and live electronics, dazzled audiences on December 11. Inspired by the contrast drawn between two domains—the cosmos and human existence—the composition was performed by violinist Jan Mráček and the Kalisz Philharmonic Symphony Orchestra during the Amber Road Festival in Kalisz.