2015 marks the 30th anniversary of the Polish Music Center at the USC Thornton School of Music—a library and cultural outreach center established in 1985 for the promotion of Polish music and culture that has no equal anywhere in the world. Read an overview of the anniversary in our Feb 2015 Newsletter.

Poland’s premiere music publishers, Polskie Wydawnictwo Muzyczne SA (PWM), celebrated 70 years of operations in 2015. It is appropriate that this anniversary lines up with the PMC’s own celebration of 35 years, as it was the close relationship with PWM—cultivated by PMC founder Wanda Wilk—that led to the development of the PMC’s extensive collection of published music. According to Daniel Cichy, PWM Editor-in-Chief: “We will celebrate the 70th anniversary with the slogan: “We play fair. And we’ve done it for 70 years” in mind. Let’s make music together!” 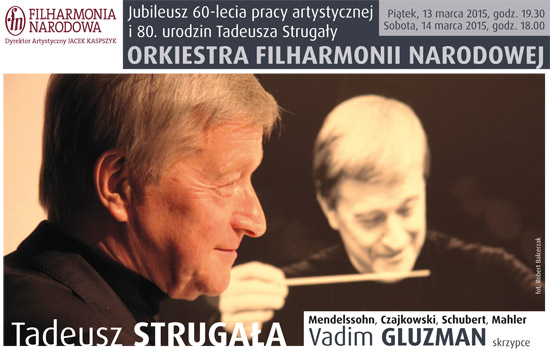 On March 13, the Warsaw National Philharmoniccelebrated the 80th birthday of Maestro Tadeusz Strugała, who has long been associated with the Philharmonic and continues to serve as deputy Artisitic Director and permanent guest conductor. Since his career began 60 years ago, as an oboist with the Wrocław Symphony Orchestra, Strugała has been a vigorous organizer of musical life—not only in Poland, but around the world. Read more about Tadeusz Strugała’s extensive career at culture.pl or www.strugala.com

In 2015 the world will celebrate the 85th birthday of Romuald Twardowski. Born in 1930 in Vilnius, Twardowski is one of the greatest composers of Polish choral music. Apart from vocal works, he is also the author of numerous theatre and symphonic compositions.

The Artur Rubinstein Philharmonic Orchestra in Łódź celebrated its centenary in 2015. In celebration, on Feb 17 the ARPO will hold an Anniversary Gala Concert featuring the World Premiere of Krzysztof Meyer’s Musica festiva for two organs and orchestra.

Celebrating their ‘Joyous Jubilee’ of 50 years of artistry, the Lira Ensemble performed a “Music Just for Lira” benefit concert in Chicago on March 11.

Polish Radio celebrated its 90th anniversary with a gala event at the National Opera in Warsaw on April 21. During the evening, Jacek Kaspszyk, the Artistic Director of Warsaw Philharmonic was presented with the Diamond Baton Award, one of the most important professional accolades given by the Polish Radio, “in recognition of his conducting career together with gratitude for his devotion to public broadcasting, to which he has contributed a truly astonishing amount of studio and concert recordings.” 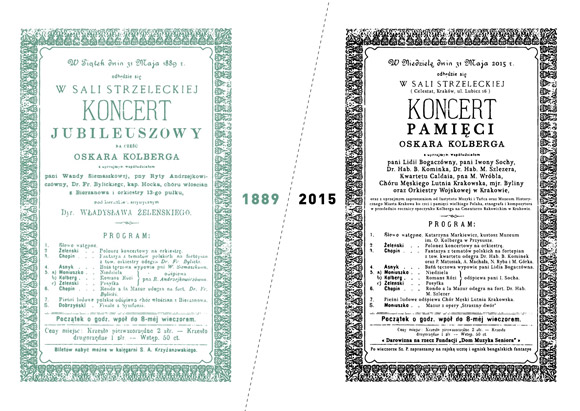 A very special concert was held in Kraków on May 31, the eve of the 125th death anniversary of Oskar Kolberg. The musicians from the Kraków Music Academy, the Men’s Choir Lutnia, and the Kraków Military Orchestra presented the exact replica of program commemorating Kolberg held in 1899. The concert featured works of Frederic Chopin, Władysław Żeleński, Stanisław Moniuszko and Oskar Kolberg, as well as selections of folk songs and poetry by Adam Asnyk.

Between May 30 and June 14, the Silesian Opera in Bytom celebrated its 70th anniversary with a program devoted to operatic works by Polish composers, including two works by Stanisław Moniuszko: his one-act opera Verbum nobile and ballet Na kwaterunku [At the Campside], Ignacy Jan Paderewski’s Manru, Ludomir Różycki’s Pan Twardowski, and a special concert presented by the Silesian Opera Choir with a guest artist, mezzo-soprano Krystyna Szostek-Radkowa, who will celebrate her 60th year of professional music career. The final gala will feature Moniuszko’s most famous opera, Halka, a work that has remained in constant repertoire of the Silesian Opera ever since its first performance after World War II in Poland.

On December 10, Sinfonia Varsovia presented a special concert at the POLIN Museum of the History of Polish Jews in Warsaw in celebration of the Adam Mickiewicz Institute’s 15th anniversary. The orchestra was joined by horn soloist Stefan Dohr performing the World Premiere of Voyski’s Horn Concerto by Chinese composer Dai Bo with conductor Maciej Tworek. Krzystof Penderecki also conducted his own Sinfonietta per archi.

In honor of the 90th birthday of Polish composer, pianist and pedagogue Andrzej Nikodemowicz, the Lublin Section of the Polish Composers’ Union hosted a recital in the Chamber Hall of the Institute of Music of the Maria Skłodowska-Curie University on Dec 10. The program was comprised of classical repertoire by Chopin and Liszt, performed by Michał Drewnowski.