The UK premiere of Krzysztof Penderecki’s Seven Gates of Jerusalem inspired a four-day festival of Polish culture held at the Royal Northern College of Music in Manchester. The Seven Gates: a Journey of Discovery festival (June 23-26) was filled with works by Polish composers from Szymanowski to Zubel and accompanied by film screenings and works inspired by Polish music.

The Karol Szymanowski Music Days Festival (July 25-August 2) focused this year on Szymanowski’s connections to the Ukraine, where his family’s estate once stood. Highlights were a performance of the two-piano version of Szymanowski’s ballet Harnasie by Joanna Domańska and Andrzej Tatarski (as recorded on DUX 0576) and book promotions with Szymanowski scholar Teresa Chylińska, as well eight different concerts held in the most important landmark buildings in Zakopane.

After 10 years of working together, the Kwadrofonik Ensemble—pianists Emilia Sitarz and Bartłomiej Wąsik and percussionists Magdalena Kordylasińska and Miłosz Pękala—organized the first edition of the Kwadrofonik Festival (September 4-6) at the Polish Radio studios in Warsaw. Conceived as a fresh take on the presentation of contemporary music, it featured Garage Ensemble from Germany and Asamisimasa from Norway, as well as works created by the most interesting international composers, directors and video artists of Generation X and Y.

At the opening of the International Montreal Jazz Festival on June 26, former members of the “12 piece orchestra” and other Canadian colleagues and friends played a tribute for pianist and composer Jan Jarczyk, who passed away on August 3, 2014. Jarczyk’s music also sounded again in Poland during a special memorial concert at the 20th Jubilee Summer Kraków Jazz Festival at Piwnica pod Baranami (June 26–July 31). 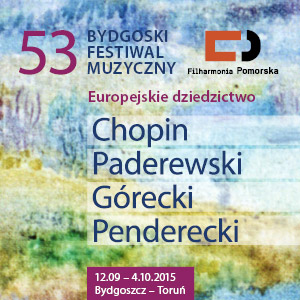 For over half a century, the Music Festival in Bydgoszcz (Sept 12 – Oct 4) has closely adhered to its stated aim of promoting Polish music and featuring the greatest artists of the present day. The Festival opened on September 12 with the performance of Paderewski’s massive “Polonia” Symphony then continued with works by Chopin and concerts featuring Henryk Mikołaj Górecki, one of the most original composers of our times, and Krzysztof Penderecki, who continues to redefine the image of Polish contemporary music. In addition, works by Mieczysław Karłowicz, Wojciech Kilar, Witold Lutosławski, Piotr Perkowski, Kontanty Regamey, Karol Szymanowski,  Alexandre Tansman, Mikołaj Górecki and Marta Ptaszyńska were heard. 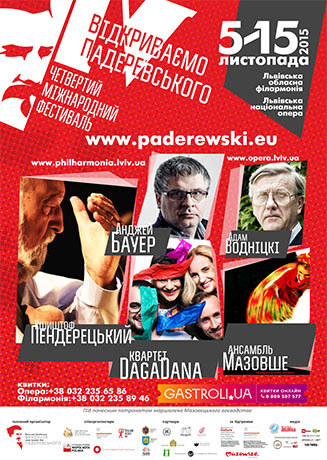 The giant 2nd edition of the Ignacy Jan Paderewski International Festival (Nov 6-12, Warsaw) was organized by the Ave Arte Foundation and featured choral pieces performed by the Academic Choir of the University of Warsaw, fragments of Paderewski’s opera Manruperformed by soprano Katarzyna Laskowska and tenor Rafał Bartmiński, and a “Paderewski – Jazz Inspirations” program of songs by Paderewski and Stojowski prepared by Krzesimir Dębski, as well as performances by piansts Wojciech Kocyan, Albert Diaz, Xavier Muta, and Melodie Zhao and the Sinfonia Iuventus and Sinfonia Varsovia orchestras, among others.