This year’s PMC spring concert is a joint collaboration between the PMC, the USC Thornton School of Music’s Composition Department, and the USC School of Cinematic Arts. Entitled “Measures & Frames” and presented by Visions & Voices—USC’s Arts and Humanities Initiative—the evening will combine music and film, seeking to discover the hidden and serendipitous connections between these two disciplines. In a way, the March 28 event at USC’s Alfred Newman Recital Hall will harken back to the early days of silent films, where images were accompanied by live musical performance. The audience will have a chance to experience the merging of music and video imagery, created by leading composers and filmmakers and performed by the Penderecki String Quartet and soprano Rebekah Barton.

The second movement of Polish composer Joanna Bruzdowicz’s String Quartet No. 1 “La Vita” will accompany fragments of Agnès Varda’s celebrated film, Vagabond, a moving depiction of a homeless young woman’s tragic last days of life. The three movements of Jeff Holmes’s String Quartet No. 2 “Kirurgi” will be paired to video projections specially created for the event by Michael Patterson and Candace Reckinger, two animation artists and faculty at USC School of Cinematic Arts. 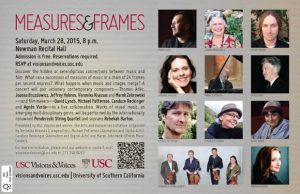 In addition, together with a group of talented USC animation students, Patterson and Reckinger have created stunning video projections for two other string quartet works on the March 28 program: Arcadiana by Thomas Adès and midaregami by Veronika Krausas. Commissioned by the Endellion Quartet and the Holst Foundation, Adès’s Arcadiana dates from 1994 and explores the concept of vanishing idylls. Spanning seven movements, its odd-numbered movements are connected to watery images and even-numbered ones to pastoral, “arcadian” environments. A 2006 commission from the Penderecki String Quartet and the Canada Council for the Arts, Veronika Krausas’s midaregami [Tangled Hair] adds a soprano solo to the string quartet. Based on a collection of poems by Akiko Yosano (1878-1942), the music reflects the delicate, fleeting imagery contained in seven short poems-vignettes depicting idealized love.

The evening’s musical and filmic presentation will conclude with Fire (Pożar), a 10-minute animation by David Lynch accompanied by Music for David, a 2015 string quartet composition by Marek Zebrowski. A Q&A with the performers, filmmakers and composers will follow directly after the concert.

With three screens framing the back of the stage, Alfred Newman Recital Hall will be transformed for the event. Digital projectors installed especially for the occasion will provide a unique visual experience for the public. Throughout the evening, the celebrated Penderecki String Quartet from Toronto will take the Center stage to interpret the music by Adès, Bruzdowicz, Holmes, Krausas and Zebrowski. The quartet’s challenge will be to perfectly synchronize the music to films by Lynch and Varda as well as to visualizations provided by Patterson and Reckinger.

Widely acknowledged as one of the most prominent chamber ensembles today, the Penderecki String Quartet has concertized throughout the United States and Canada, as well as Europe, South America, and the Far East. The Quartet champions contemporary music and have premiered over 100 new works from composers all across the world. They have also recorded works by Brahms, Bartók, Beethoven, and Penderecki, among others. The Penderecki String Quartet members include violinists Jeremy Bell and Jerzy Kapłanek, violist Christine Vlajk and cellist Katie Schlaikjer, all members of the faculty of music at Laurier University where they coordinate one of the best string programs in the world.

Admission to the “Measures & Frames” event is free and open to the public, however RSVP is required. To reserve your spot, please visit visionsandvoices.usc.edu.