A Review by Marek Zebrowski

On Tuesday, 24 February, the large crowd gathered in USC’s Alfred Newman Recital Hall greeted the onstage entrance of cellist Jan Kalinowski and pianist Marek Szlezer—otherwise known as the Cracow Duo—with hearty applause. Without much fuss, the two young musicians quickly launched into Chopin’s Op. 3 Polonaise and dispatched it with just the right degree of salon grace and nonchalance. Far from telegraphing a traditional program to follow, the Chopin was simply a prelude to an exciting evening of rarely-heard music for cello and piano.

An American premiere of Krzysztof Meyer’s Drei Mal Vier, Op. 123, followed; its modern harmonies provided a good contrast to Chopin, while its virtuosity continued to showcase the ensemble. Written for German cellist Julius Berger, the work gave Kalinowski an opportunity to display his technical prowess, which was ably complemented by Szlezer’s pianistic skills. 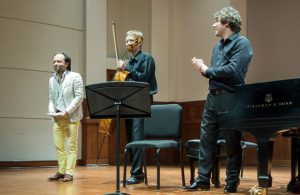 Composed in 2014, Marcel Chyrzyński’s Farewell, is a contemplative and mostly melodic work that moved the audience with its genuinely-felt emotions rooted in a simple formal design. The two other contemporary works on the program—Tomasz J. Opałka’s The Glitch and Wojciech Widłak’s All My Angers—were also quite emotive, even if their impassioned musical message was couched in more modern harmonic language and communicated with a variety pf extended sound production techniques. Opałka’s use of bowing hair and gentle tapping of pianist’s palms on strings added haunting hues to the first part of The Glitch, while its second part—a relentless moto perpetuo—drove the piece to an explosive final cadence. Written especially for the Cracow Duo, the work’s world premiere was enthusiastically received by the audience at USC. Highly concentrated emotions also accompanied Widłak’s All My Angers, a bitter and brilliant work that took the Cracow Duo and the audience to the limits of tension, with thick sound textures and colors that culminated in a slamming down of the piano lid at the end of the piece.

Two major works by Aleksander Tansman—a one-movement Fantaisie (1936) and the three-movement Cello Sonata No. 2 (1930)—provided the centerpiece of Cracow Duo’s recital program. Both works owe much to the mid-twentieth century French modernism, with a liberal dose of jazz harmonies. Written idiomatically for cello and piano, these gems of chamber music literature deserve much more stage exposure. As it was, on this occasion the Cracow Duo displayed their musicianship and skill to great advantage in Tansman’s difficult but very effective music. The Fantaisie had just the right amount of freedom and flexibility within its gently-swaying, bluesy episodes, while the Sonata—especially in its last movement—had plenty of sparkle and elegance in its virtuoso design. Kalinowski and Szlezer have recorded these works before and clearly felt at home performing them for the Los Angeles audience. Here’s a wish that they introduce the Tansman—as well as his Polish composer contemporaries—to many more appreciative audiences all around the world. 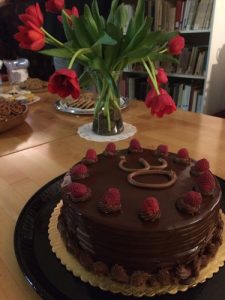 The concert was followed by a reception honoring the PMC’s 30th Anniversary, which was attended by such members of the community as Vladek Juskiewick of the Polish Film Festival, L.A.’s new Consul for Culture Ignacy Żarski, and former PMC Director Maja Trochimczyk.