Kuba Stankiewicz, a distinguished Polish jazz pianist, presented a series of jazz trio concerts in California during the first part of May. Stankiewicz’s performances spotlighted his recently-released recording of music by Victor Young on the Warner Records label. With extensive liner notes and fascinating photos, this attractively presented CD features eight signature tunes by Young, including such all-time favorites as Love Letters, Stella by Starlight, Johnny Guitar and Summer Love, among others. Two outstanding LA-based musicians who are also on the faculty of the USC Thornton School of Music joined Stankiewicz in this excellent sounding presentation: bass virtuoso Darek Oleszkiewicz, and Grammy Award winning percussionist Peter Erskine.

This same ensemble presented Victor Young’s music live at two Los Angeles-area venues at the beginning of the month: the Catalina Club on Sunset Boulevard on May 1, and the American Jewish University on Mulholland Drive a few days later. The trio continued to celebrate the music of Victor Young, who was born to a Polish-Jewish emigrant family in Chicago in 1899 then, after his mother’s death, was sent with his sister Helen to live with their relatives in Poland, where both attended music schools. Prodigiously talented, Victor quickly developed into a violin virtuoso and, as a teenager, made his debut with the Warsaw Philharmonic. By 1921 Young returned to Chicago and gradually began to build a career as violinist, conductor and arranger. 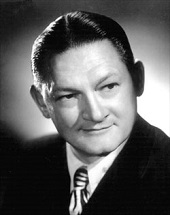 By the mid-1930s Young had settled in Hollywood and became a very successful composer of film music and show tunes, performed by leading singers of the day, including Bing Crosby, The Boswell Sisters, Dick Robertson, and Lee Wiley, among others. First signed to Brunswick Records in 1931, since 1934 Young recorded with Decca and his studio recordings featured top-rated musicians of the era, including Tommy and Jimmy Dorsey, Joe Venuti, Eddie Lang and others. Among many memorable film scores by Victor Young one must list Anything Goes (1936), The Gladiator (1939), Golden Boy (1939), For Whom the Bell Tolls (1943), The Uninvited (1944), Love Letters (1945), So Evil My Love (1948), The Emperor Waltz (1948), The Paleface (1948), Samson and Delilah (1949), My Favorite Spy (1951), The Quiet Man (1952), Scaramouche (1952), Something to Live For (1952), Shane (1953), The Country Girl (1954), A Man Alone (1955), Written on the Wind (1956), and Around the World in Eighty Days (1956), for which he posthumously received the Academy Award in 1957. Altogether, Victor Young’s film credits extend over 300 film scores over a period of two decades in Hollywood, during which he was nominated for the Academy Award a record twenty-two times. He died on November 10, 1956 from a stroke at his home in Palm Springs, California. Young’s niece in Los Angeles, Bobbie Fromberg, remembered him as a bon vivant, “… a little Jewish man from Chicago via Warsaw, who was stocky like a boxer with a cigar s tuck in his mouth all the time and the heart and soul of a romantic.” Asked about her uncle’s compositions, Mrs. Fromberg said, “Just close your eyes and listen to the music. It envelopes you and your imagination and takes you places you’ve only dreamed of. That’s good music and that’s what he wrote.” 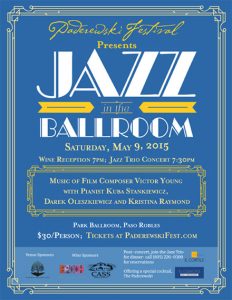 The music of Victor Young certainly resonated with the select audience that gathered at Paso Robles’ historic Park Ballroom on May 9. For this occasion, Kuba Stankiewicz and Darek Oleszkiewicz were supported by another LA-based percussionist, Tina Raymond. Stankiewicz’s sensuous piano style was ideally matched by Oleszkiewicz’s acrobatic bass lines, and his virtuosity and musicianship proved especially impressive in the amazing extended bass solo in Johnny Guitar. Throughout the evening Tina Raymond, quietly placed behind her drum set, delivered a finely-laced and musically-compelling rhythmic groove. Her solos in a few numbers displayed white-knuckle bravura and good taste in an especially pleasing combination. All night long, the refined touch that Kuba Stankiewicz applied to Young standards such as Love Letters and Stella by Starlight proved an inspiration to his ensemble-mates, who clearly enjoyed making music of the highest caliber.

The audience, appreciative of such rare treat, elicited two encores from the performers. In a surprising move, Stankiewicz spontaneously decided to present for the first time in public two numbers from his upcoming CD—a disc featuring music by another Polish composer turned Hollywood great, Bronisław Kaper—which had just been recorded with Oleszkiewicz and Erskine in LA a few days earlier. With the 1935 Kaper hit Ninon, the jazz trio charmed the audience and, after a spirited rendition of the Kaper favorite On Green Dolphin Street, the hearty applause resonated long into the night.