June 17, 2015 is the 85th birthday of Romuald Twardowski—composer, teacher and author of orchestral, choral and theatre music. Encompassing almost all genres, his oeuvre is a boundless source of varied repertoire, from religious music, through song cycles to great orchestra forms.

Below is an excerpt from “Romuald Twardowski. The Master of Choral Music” by Karolina Kolinek-Siechowicz:

It seems that the choir, whether homogeneous or mixed one, is one of the most favourite line-ups for Twardowski. Excellent knowledge of choral polyphony, acquired both by personal experience and during extensive studies with Nadia Boulanger, allowed him to master the polyphonic structure of a vocal ensemble. However, Twardowski would not limit himself only to sacral music – apart from many religious compositions, he also wrote secular music for the choir, drawing from Polish folklore and Polish poetry. In that character he composed his early pieces: Bucolics for mixed choir (1962), Ode to Youth for reciting voice, mixed choir and orchestra (1969), Two Playful Songs (1972, in two versions: for mixed choir or for female or boys choir), Sea Impressions for mixed choir (1975) and two compositions for mixed choir from 1980: Village Concert and Three Songs from Kurpie. Small Concert for vocal orchestra (1988) is an extremely charming composition for mixed choir, in which Twardowski plays with various sound articulation techniques in singing.

Read the entire article at pwm.com.pl 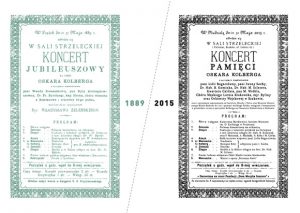 A very special concert was held in Kraków on May 31, the eve of the 125th death anniversary of Oskar Kolberg. The musicians from the Kraków Music Academy, the Men’s Choir Lutnia, and the Kraków Military Orchestra presented the exact replica of program commemorating Kolberg held in 1899. The concert featured works of Frederic Chopin, Władysław Żeleński, Stanisław Moniuszko and Oskar Kolberg, as well as selections of folk songs and poetry by Adam Asnyk.

This fascinating musical reenactment was organized by Institute of Music and Dance and the City of Kraków Historical Museum from funds advanced by the Ministry of Culture and National Heritage. Although the admission to the concert was free and open to the public, donations for the Musical Home for Seniors were solicited from the public.

Between May 30 and June 14, the Silesian Opera in Bytom is celebrating its 70th anniversary with a program devoted to operatic works by Polish composers. The festive opening evening featured two works by Stanisław Moniuszko: his one-act opera Verbum nobile and ballet Na kwaterunku [At the Campside]. The jubilee season performances will also include presentations of Ignacy Jan Paderewski’s Manru, Ludomir Różycki’s Pan Twardowski, and a special concert presented by the Silesian Opera Choir with a guest artist, mezzo-soprano Krystyna Szostek-Radkowa, who will celebrate her 60th year of professional music career.

The final gala will feature Moniuszko’s most famous opera, Halka, a work that has remained in constant repertoire of the Silesian Opera ever since its first performance after World War II in Poland, on June 14, 1945. For the past 70 years, the Silesian Opera has presented Halka in eight different stage presentations and toured with it in the United States and Canada. The latest version of this war-horse of Polish operatic repertoire will be seen by the public exactly 70 years to the day after the historic post-war performance.

As in the past, all concerts are held in the historic neo-classical Silesian Opera building, designed by Berlin-based architect Alexander Boehm and inaugurated on October 1, 1901. More information on the concert calendar for this year’s jubilee events can be found at: opera-slaska.pl/jubileusz and polmic.pl.