The latest issue of Glissando explores soundscape—the acoustic environment, the world as a vibrant composition, every sound as a component of the infinitely complex and intricate wholeness. Glissando #26 delves into how we listen, perceive, assign different meanings, imitate, play with, and shape our sonic habitat. This 184-page issue is a collection of 35 texts (of which the whole New Music in Eastern Europe section in English), putting the theory of culture, sound, and music within a broader framework, which is no longer restricted to an isolated and exclusively defined musical work, but encompasses the sonic environment in all its complexity.

Shaferian revolution in the study of sound culture; the ecological approach of sound artists; auditory perception and different listening techniques; creativity in the urban context (as exemplified by the city of Łódź); the results of sound recording practices developed over the last century, and also providing the seemingly mute artifacts like print and film stock with a sound – these topics for many years appeared and were repeatedly discussed in thematic issues of various papers and magazines, and now in the pages of Glissando.

With this issue of Glissando, the creators sought not only to expand and systematize general knowledge of the soundscape, but also be more accessible and reader-friendly. The soundscape, whether analyzed as a musical work or experienced as part of everyday life, is important for every listener. Glissando #26 studies the contemporary global composition, which forms a background for our activities, affects us in a more or less conscious way, and shapes our behavior. Exploring the sonic environment is important not only from the artistic or scientific viewpoint. It also allows the readers to enjoy their everyday listening experience more deeply and carefully.

Other recent issues of Glissando that were published either partially or fully in English are: 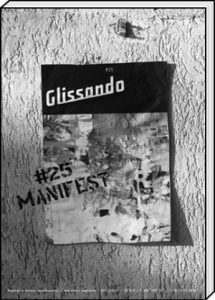 Glissando #25 (2014, EN/PL) explores the subject of Manifesto, the emblematic form of statements of modern culture, which is connected with sound and music in number of ways. This 160-pages long issue of Glissando contains a collection of texts investigating those relations from various perspectives. Devoted primarily to the history of the connections between manifestos and the audial in Central and Eastern Europe, the issue has been divided into four sections, tied together by the introductory essay by Antoni Michnik. 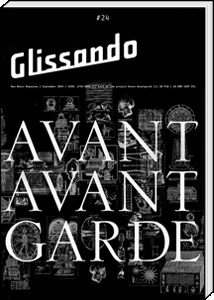 Glissando #24 (2014, EN/PL) is a resume of a curatorial and editorial research for experimental music before the 20th century – part of the Avant Avant Garde project organized by Foundation 4.99 and ZAM e.V. The publication brings together dozens of anecdotes, scores, sketches and other takes on experimental practices with sound and music foreshadowing the avant gardes and sound art of the last 100 years. With figures such as La Monte Young, Karlheinz Stockhausen, Burkhard Beins or Lugi Russolo in the back of your heads, get into Celts and Hussars, Václav Prokop Diviš and Ernst Chladni, Leonardo da Vinci and Athanasius Kircher – and many, many more. 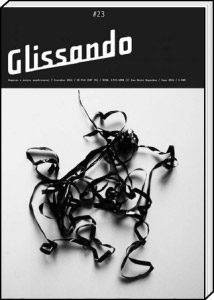 Glissando #23 (2014, EN/PL) explores the history of the cassette tape. Mobile cassette recorders were often used as a part of non-institutional practics in everyday life as the tactics of resistance to regimes of power and symbolic violence (as a cultural memory, tactical medium or dissident activity). In Poland and Eastern Europe during the communist era a cassette tape was a part of “second circulation”, mixing art, the political speeches, the political satires and underground music in one circulation without censorship. Today cassette tape still produces the cultural dreams, phantasms and memories: recording process as a metaphor; cleaning the tapes, erasing the memories, deleting the history; tape hiss and “the uncanny”. MC is the new, old thing. All texts in this focus are in English and an extra is an anthology cassette of The Sounds of Deep Poland, produced by Noisen Records especially for Glissando. Other topics include: New Music in Eastern Europe and Middle Generation, presenting young Polish composers, as well as the most fascinating phenomena in neighbouring countries. This issue represents Glissando’s new opening into the East and English, to be continued!