The 2006 recipient of the prestigious Gilmore Artist Award, Argentinian pianist Ingrid Fliter has focused intensely on the music of Fryderyk Chopin during her prodigious career. She has produced several excellent and highly praised recordings that showcase different aspects of his oeuvre. The most recent is her recording of his 24 Preludes for Linn Records— you can hear her delve into this exquisite music at www.youtube.com.

The disc was named Gramophone Magazine’s ‘Recording of the Month’ in November 2014 with these words of praise: “Ingrid Fliter seems to be able to achieve individuality seemingly effortlessly, with cherishable and memorable results. She is a virtuoso of the first order but she holds this in reserve, so when she does unleash her full technical armoury, it’s extraordinarily potent. A gem of a disc.” This disc also made Gramophone’s List of Top 10 Chopin recordings, or what they consider the ten best ways to expand your Chopin collection, in April 2015.

Below are Fliter’s recordings dedicated solely to Chopin: 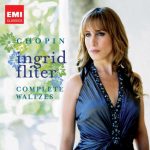 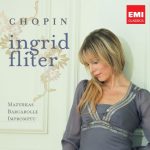