January 27, 2015 marked the 70th anniversary of the liberation of the German Nazi concentration and extermination camp of Auschwitz-Birkenau, a UNESCO World Heritage site. Over 1.1 million people were killed in Auschwitz, including nearly 1 million Jews and tens of thousands of Poles, Roma and Sinti, Soviet prisoners of war and political opponents from all over Europe.  In 2015, International Holocaust Remembrance Day was marked by a number of national and international events throughout the world. Below are some of the prominent events that took place, and many more are listed on the website of the International Holocaust Remembrance Alliance as well as the Map of World Remembrance, and the London Telegraph  has a list of live updates from events that happened around the globe.

UNESCO “Liberty, Life and Legacy of the Holocaust Survivors”

According to Irina Bokova, UNESCO Director General: “UNESCO was established in the wake of the Holocaust on the conviction that lasting peace must draw on the mutual understanding of peoples and cultures, nurtured through education and knowledge sharing, in ways that highlight the best of humanity in ourselves. The Holocaust has shown us the worst of ourselves, and remembrance of the victims must accompany us in our quest for a world where such horrors will never reoccur.”

A testament of our respect to those who survived and a tribute to the memory of the victims, this International Day is also is a call for action. It is an opportunity for Member States to engage in further efforts against anti-Semitism and racism, and to develop educational programs that will help preventing similar atrocities from occurring in the future. Education has a vital role to play in fostering a culture of prevention, undermining prejudice, promoting peaceful co-existence and human rights, and cultivating respect for all peoples.

The further the genocide recedes in time, and as the last survivors pass on, the greater the need to teach about it, and understand its meaning. UNESCO promotes globally education about the genocide, believing that it will help young people, whatever their origin and culture, become more aware of the mechanisms that can lead societies to descend into violence, and how to prevent it.

In addition to this worldwide call to action, UNESCO also marked this anniversary with a week of exhibitions, concerts, film screenings and other commemorations at its headquarters in Paris, France. A special concert of the Jerusalem Symphony Orchestra was conducted by Frédéric Chaslin, featuring Ode to Peace by Chaslin, Symphony No 13 in B flat minor op. 113 “Babi Yar” by Dmitri Chostakovitch, and the Suite yiddish by Norbert Glanzberg.

The main commemoration of the 70th anniversary of the liberation of Auschwitz was held in front of the  Death Gate of KL Auschwitz II–Birkenau. On January 27 – which, for ten years now has been commemorated as International Holocaust Remembrance Day –about 300 Survivors and witnesses of the history of Auschwitz met in front of the Death Gate of the former camp in order to commemorate the anniversary. They were accompanied by the leaders of over 40 countries who listened to their words. 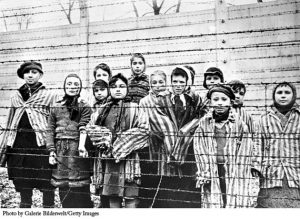 Auschwitz: The Past is Present took place from January 24-27 in Kraków, Poland. Co-organized by the USC Shoah Foundation Institute, the Auschwitz-Birkenau State Museum, Discovery Education and the World Jewish Congress, it was a joint effort was designed to promote a deeper understanding of 20th century history and its continuing relevance, hone digital literacy and critical thinking skills using real-world applications and audiovisual testimony, and inspire action against racism, intolerance, and prejudice and the suffering they cause. During the event’s reception, Shoah Institute founder Steven Spielberg and other dignitaries gathered to recognize over 100 survivors for their courage and willingness to share their stories through such media as IWitness and other Archival Collections.

The Liberation of Auschwitz

The 70th anniversary of the Liberation of Auschwitz was celebrated onJanuary 27, 2015 in the Ted Mann Concert Hall of the University of Minnesota in Minneapolis. Arnold Schoenberg’s rarely performed A Survivor from Warsaw was programmed within the WORLD-PREMIERE of noted composer James Bassi’s Five Prayers. Commissioned by The Apollo Club, Five Prayers is a five-movement symphonic song cycle for male chorus, solo baritone, orchestra, and dancer. This concert is artistically conceived to begin and end liberatingly with the darkest moment in the center of the program, to symbolically represent the U-shaped Jewish menorah. The performance featured special guests James Andrews, dancer, and Aaron James, baritone. 5% of proceeds from this concert were donated to the Jewish Community Relations Council of Minnesota & The Dakotas.

Art from Ashes: Concert Commemorating the 70th Anniversary of the Liberation of Auschwitz 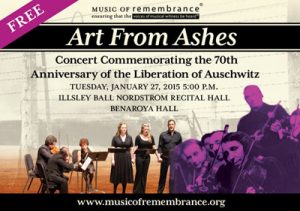