The 56th International ‘Warsaw Autumn’ Festival of Contemporary Music [Warszawska Jesień] will be held in various venues throughout Warsaw from September 19-27, 2014. Created in 1956 and running annually with only two exceptions since its beginning, Warsaw Autumn is a festival with a long tradition and is a true witness to music history. It is the only contemporary music festival in Poland on an international scale and with an international status. For many years, it was the only event of this kind in Central and Eastern Europe. Nonetheless, it remains a living organism: it thrives as much as Polish cultural funding and the general condition of music allow.

The Festival is organized by the Polish Composers’ Union (ZKP). The Repertoire Committee, an independent body appointed by the Union’s Board, determines the program of each edition of the festival. Warsaw Autumn is, therefore, an international and nonprofit festival of a nongovernmental association. 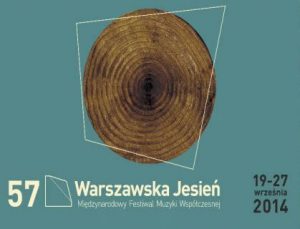 Today, Warsaw Autumn has fulfilled its original goal to familiarize Polish audiences with the classic works of the early twentieth century. Yet there remain gaps regarding the classics of the second half of the twentieth century. Filling in these gaps goes hand-in-hand with the Festival’s other primary (and timeless) objective: to present new music from Poland and abroad. Organizers strive to present this music in a way that is both of the highest artistic quality and accessible to a wide and varied audience, highlighting that which is new and different and exotic but also enriches the listener.

Regarding organizers’ dedication to the newest music of Polish composers, the following are thecomposers and pieces that will be given their World Premiere at this year’s Festival: