Miami-based Chopin Foundation of the U.S. announces the Ninth National Chopin Piano Competition and the 2014-15 Concert Season Schedule. Held in Miami every five years, the Competition attracts the best American pianists (ages 17 – 30) to compete for $160,000 in cash prizes during a week-long Chopin extravaganza. The Chopin for All Free Concert Series spanning two counties, plus an Intimate Chopin Salon Series on Miami Beach will present South Florida debuts by today’s rising piano stars 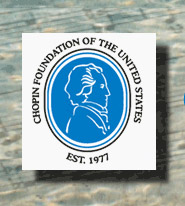 The “Chopin For All” free concert series has been offered to South Florida audiences since 1996.   Five up-and-coming young pianists will make their South Florida debuts at the Main Library in Broward and at the Granada Presbyterian Church in Coral Gables.  The final three programs in April, May and June will feature performances by the newly crowned National Chopin Competition laureates that will be announced at the March 1 Award Ceremony.

The Salon Series consists of two intimate concerts, each followed by a wine reception and a sumptuous dinner, held at La Gorce Country Club, 5685 Alton Road, Miami Beach.  These fundraising events are open to the public and provide an excellent opportunity to meet the artists and socialize with other classical music enthusiasts in an absolutely fabulous setting. Due to the increasing popularity of the Salon concerts, advance reservations are required for these events which are truly a feast for all of the senses.

Chopin for All Free Concert Series

The 4:00 pm Sunday concerts are followed by a wine reception and optional dinner with wine

For tickets, reservations and information about the Chopin Foundation of the United States or how to become a member, please visit the website at www.Chopin.org or contact the organization directly at info@Chopin.org or 305-868-0624.