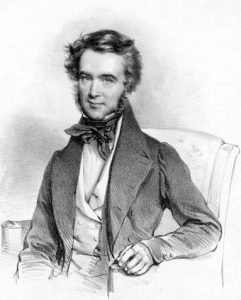 The late January 2014 theft of the Stradivarius violin in Milwaukee served to highlight not only a famous violin but also its namesake, Karol Lipiński (1790-1861), Poland’s foremost virtuoso violinist in the first half of the 19th century.

An outstanding performer in solo, chamber ensemble and orchestral concertmaster capacities, Lipiński was among the early players who attempted to convey the composer’s intentions rather than pattern his performance style after the frequently musically shallow technical displays of then prominent virtuosos. Besides his own works, Lipiński’s repertoire often included music by Haydn, Mozart, Beethoven and prominent French and German composers of the time. Lipiński possessed a unique deep, full sound and powerful bowing technique that allowed a wide range of expression and an unusual degree of instrumental lyricism, which he attributed to his studying and playing the cello during his early years. His virtuosity was always used to highlight the music rather than the playing itself. Performing to frequent great acclaim throughout Europe, Lipiński’s friends and fellow performers included Berlioz, Chopin, Glinka, Liszt, Mendelssohn, Meyerbeer, Clara and Robert Schumann (who dedicated his Carnival to Lipiński), Spohr, Wagner as well as the poet Adam Mickiewicz.

Largely self-taught and constantly developing throughout his career, Lipiński began his studies with his amateur-violinist father, who conducted noblemen’s orchestras in Radzyń (near Lublin), where Karol was born, and Lemberg (Lwów), the capital of the Austrian Partition also called Galicia. Lemberg not only remained the home of Lipiński’s family until 1839, but it and Dresden, were the only two cities where Lipiński held permanent positions in 1810-14 and 1839-61, respectively. Lipiński was a modest man throughout his life, and he was consistently devoted to his wife and 7 or 8 children. In 1861 he retired and moved to Urłów (near Lemberg), where he died.

Much of Lipiński’s enduring fame is based on his long-term association with the legendary Italian Nicoló Paganini (1782-1840). The two violinists developed a close friendship in Piacenza in 1818, when they performed both together and separately to “equally great applause” in two joint concerts. Perhaps, most remembered is when both performed in Warsaw during the 1829 festivities associated with the crowning of Russian Czar Nicholas I as king of Poland and they became the object of an extended debate in the Warsaw press as to which of the now widely famous artists was the better player. How these two truly great violinists were able to be rivals and yet remain good friends lies in how each had a unique approach that the other not only respected but also admired. Supposedly, when Paganini was asked whom he considered to be the greatest violinist, he replied, not wanting to mention himself, “I do not know who the first may be, but assuredly the second is Lipiński.”

Another frequently printed story is Lipiński’s personal reminiscence of how he acquired his famous Stradivari violin. While in Milan, he went to see a Signor Salvini, a then elderly but highly regarded former student of Giuseppe Tartini (1692-1770), the greatest violinist of his time and, within overall violin history, a major contributor in terms of playing technique, teaching and violin compositions. On the first day, Lipiński received a “very kind reception” from Salvini and, after introductions, the Pole played music by Weber and Beethoven. Continuing in the words of Count von Krockow’s brief overview of the Lipiński’s life published in the January 1896 issue of the Violin Times, “after hearing me for about a quarter of an hour, [the old gentleman] got up, looked intently first at me, and then my violin, and cried out ‘Basta.’ This ‘enough’ made me tremble, for I concluded from it that he had formed an unfavorable opinion of my playing. But I was somewhat reassured when Signor Salvini said to me in the most kindly manner: ‘Come and see me again to-morrow morning at ten o’clock.’ […]

On the next day, with much fear and hesitation, I went to Signor Salvini’s house at the appointed time. He received me with much cordiality, and before I had unfolded my music he said, ‘Please give me your violin.’ I handed it to him, and was amazed to see him grasp it firmly by the neck and strike it with all his might on the edge of the table, on which it fell, smashed to atoms. But with the greatest coolness and tranquility the old gentleman then opened a violin-case which was on the same table, and carefully taking from it a violin, said to me, ‘Try this instrument!’

I took it, and after I had played […] Beethoven […], Salvini held out his hand to me, and said with some emotion, ‘You, […] Herr Lipinski know how to use such an instrument and to give expression to its hidden power […]. You alone are a worthy follower of Tartini; therefore take this violin as a present from me, and at the same time as a souvenir of Tartini.’ Amazed, but supremely delighted, I warmly thanked him for this superb and costly gift, on which I afterwards played with and in emulation of Paganini.”

Throughout his career Lipiński was also active as a teacher. Two boys he mentored in 1848, Joseph Joachim and Henryk Wieniawski are now considered to be among the most important violinists of the 19th century. Indeed, in terms of playing approach, Lipiński can be considered the predecessor of Wieniawski (1835-1880), Poland’s most famous violinist, who also dedicated his early famous Polonaise in D Major, Op. 4 to Lipiński. The Karol Lipinski and Henryk Wieniawski International Competition for Young Violinists that takes place in Lublin every three years serves to perpetuate the memory of both violinists.

Lipiński was also a composer, but the only work that was played to any extent after his death was his Violin Concerto No. 2 in D Major (Concerto militaire), Op. 21. While even this work was rarely played during the 20th century, Lipinski’s music seems to be garnering more interest now, especially his violin concertos, caprices, impromptus and variations.

An extensive account of Karol Lipiński’s life and career can be found in Józef Powroźniak’s well-researched Lipiński in either Polish (1970) or English translation (1986). 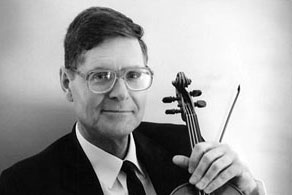 Tyrone Greive is professor emeritus of violin at the University of Wisconsin–Madison, where he taught for 34 years. He also has performed widely and frequently as recitalist, concerto soloist, chamber musician and orchestral concertmaster. Greive’s research has included examination of Polish violin repertoire as well as the history of the instrument in Poland. His articles about Polish violin music have appeared in Strings, The Strad, Journal of the Violin Society of America, American String Teacher, The Violexchange, The Instrumentalist and The Polish Music Journal. The recipient of several research grants and a 1997 Stefan and Wanda Wilk Prize for Research in Polish Music sponsored by the Polish Music Center at USC, his performance editions of Polish violin music, often created from manuscripts housed in Polish libraries, have been published by PWM Editions in Poland and Hildegard Publications and International Music in the US. Along with pianist Ellen Burmeister, Tyrone Greive has recorded Polish Romantic Music of late 19th and 20th Centuries and The Polish Tradition for the Albany CD label.