A leading figure on Poland’s independent music scene, the music of pianist Marcin Masecki (above left) veers from jazz and free improv through the dance and brass band sounds of his native country, to re-interpreting classical music in often unusual settings. On November 14, he teamed up with British jazz pianist Alexander Hawkins, creating musical fireworks on the stage of Southbank Centre’s Purcell Room. On November 15, Masecki played a short solo set reflecting his inspiration from Krzysztof Komeda’s music—this marked the release of a definitive box set entitled Jazz in Polish Cinema (Out of the Underground 1958-67) by Jazz on Film Records, and served as an introduction to the screening of Roman Polański’s 1962 film Knife in the Water (with a score by Komeda) that followed the concert and CD launch.

Called “uncategorizable, beautiful – a real force to be reckoned with” by BBC Radio 2, Polish singer and violinist, songwriter and composer Alice Zawadzki (above center) performed on November 19 in Royal Albert Hall’s Elgar Room. Her concert included songs from her debut album, China Lane, as well as some brand new songs—revealing influences from New Orleans soul and gospel, her classical training and improvised music. Zawadzki also lent her unique voice to the concert fronted by the Engines Orchestra and the Phil Meadows Group on November 22 at Kings Place.

This was one of those rare jazz gigs that transported us from pure joie de vivre to the quietest introversion, all within the space of three captivating hours… Moving from Stefano Bollani to the venerable Polish trumpeter Tomasz Stańko and his New York Quartet was like moving from sunshine to deep melancholy twilight. But it was a pleasurable twilight, full of interesting shadows and haunting lyricism.

Also at the Festival was the multi-national and “astoundingly accomplished” (Daily Telegraph) trio led by Polish pianist Leszek Możdżer (right) with bassist Lars Danielsson and percussionist Zohar Fresco. On Friday November 21 in Cadogan Hall, the trio of Możdżer/ Danielsson/ Fresco shared the stage with expressive Polish vocalist Sylwia Bialas and her recording colleague, Israeli percussionist Asaf Sirkis. The concert brought the contemporary spirit of European jazz to the Festival. 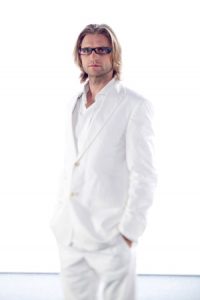 Bob Weir of the UK’s Jazz Journal said of the November 21 concert: “Możdżer’s piano playing is breathtaking—classically trained and Chopinesque in parts but always infused with powerful jazz sensitivity.” Read the full review at www.jazzjournal.co.uk.