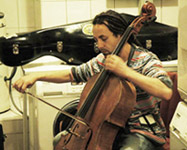 The 65th session of Musica Moderna was held November 26—December 6 in Łódź.  Professor Deborah Bradley-Kramer from Columbia University in New York City and Jarosław Płonka from the Kraków Music Academy were special guests along with the Warsaw-based INTEGRO Ensemble.

Professor Bradley-Kramer inaugurated the festivities with her Nov. 26 lecture and the Festival began with a Nov. 29 concert at the Łódź Music Academy Concert Hall. During the first half of December works by young composers—students at the Academy—will be presented at a number of concerts held in a variety of venues in town, including churches, music school auditoria, and other civic spaces.