The Consulate General of the Republic of Poland in Los Angeles and the Polish-American Congress proudly present a mass to celebrate the 60th anniversary of the end of World War II. Held at the Cathedral of Our Lady of the Angels in downtown Los Angeles, the celebratory mass will feature organ music as well as choral arrangements of Polish hymns. Honorary guests will include Polish veterans, the Los Angeles Consular Corps, and California state government representatives.

Following the hour-long mass will be a cultural event in the Cathedral courtyard. Celebrating Poland’s Constitution Day (May 3), this event will feature performances by some of Los Angeles’ premier Polish folk dance ensembles, including Krakusy, Polanie, and Podhale. 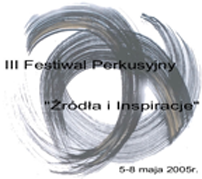 The “Sources and Inspiration” International Festival of Percussion Music will be hosted on May 6th – 8th, 2005 by the Academy of Music in Krakow’s Department of Wind Instruments, Percussion and Accordion. The festival, in its third year, will be comprised of workshops, seminars, and concerts. Various percussion instrument manufacturers will be showcasing new products as well.

This year’s festival will feature an internationally-known panel of performers and speakers in addition to various big bands and percussion ensembles from the Krakow Academy of Music. Panelists will include Pierre Favre, highly respected as one of the best drummers and jazz composers of Switzerland; Giridar Udupa, specialist in table, ghatam and other Indian percussion instruments; and Professor Klaus Tresselt, one of the most eminent pedagogues of percussion in Germany, with the Stuttgart Percussion Ensemble.

See the web site www.amuz.krakow.pl/en/FP/indexPL.html for more detailed information about the festival, including artist biographies and a schedule of concerts.

May 5 – 11 marks a week of celebrating Polish film in New York City. Produced by Hanka Hartowicz Production FILMART and Film Polski Agency, the festival will be showing over twenty films: new features, co-productions, a retrospective, documentaries and short films by Polish film makers and promising film students. Following the opening night gala on May 5th at the Directors’ Guild Theater, the festival will continue at the Anthology Film Archives from May 6th through the 11th. The festival will be showing films by Oscar nominees Agnieszka Holland (Julia Walking Home), Hanna Polak and Andrzej Celiński (The Children of Leningradsky), and Tomasz Baginski. Hanna Polak will be talking about her film The Children of Leningradsky.

The NYPFF is also very proud to present the first-ever Elzbieta Czyzewska retrospective in America. Films spanning her forty-year on-screen career will be shown, including never-before-seen films from her days at the Lodz Film School in the early 1960’s. The well-known Polish screen legend will be present in person for this special tribute to her important contribution to Polish culture.

For more information about the festival and a full festival schedule, go to their home page, www.nypff.com.

HIGHLIGHTS OF THE PROGRAM:

Chopin In The Summer 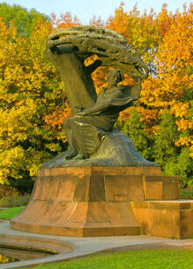 May marks the beginning of summer Chopin concert season in the Royal Łazienki Park and in Żelazowa Wola. The season in Żelazowa Wola starts off with recitals of Regina Smendzianka and Tadeusz Chmielewski on May 2. Concert season in Żelazowa Wola lasts from May till the end of September. In May, June and September, concerts are held only on Sundays (at 11 am and 3 pm). Sunday concerts feature renowned pianists, mainly winners of International Chopin Competitions. In July and August, Saturday recitals are held (at 11 am). They are called “The Youth Stage” and feature young artists.

The first of the recitals in Łazienki Park are planned for May 16th. Du Taihang from China and Jean Marc Luisada from France perform that day. Concert season in the Royal Łazienki Park lasts from May until September. Concerts are held each Sunday at noon and at 4 pm at the foot of the monument to Frederick Chopin, pictured above.

The concerts at Żelazowa Wola and Łazienki Park are managed by the Frederick Chopin Society in Warsaw. See their website, www.chopin.pl or www.infochopin.pl for these and other Chopin concerts in Poland.

PWM has just published a new book about Juliusz Zarębski, written by Golianek Ryszard. Titled Juliusz Zarębski; Man, Music, Culture, the book bears witness to the high level of his work and calls him the “most outstanding Chopinesque composer.” The book also postulates that it is largely due to Zarębski’s musical influence that any link can be made between Chopin and the 1900’s compositions of Karlowicz and Szymanowski.

To find out more or to purchase the book, go towww.pwm.com.pl/index.php?Lng=2

On Thursday May 19, 2005 at 8 P.M., the Kosciuszko Foundation will be hosting an evening of piano and cello, played by husband and wife, Thaddeus and Susan Brys. A native New Yorker, Thaddeus Brys taught cello and chamber music at Louisiana State University, and is now active as soloist and chamber music collaborator. He has also toured as a chamber player for Columbia Concerts. Brys received his training at the Mannes College of Music and The Juilliard School, and has coached with Pablo Casals in France and Vermont. His wife, Susan Brys, a student of Arthur Balsam, has toured as an accompanist and chamber musician throughout the United States and Europe, and is a former member of the Baton Rouge Symphony.

The Annual San Francisco Chopin Competition for Young Pianists is open to pianists fifteen years old or younger, residing or studying in the San Francisco Bay Area. The winners of the competition will perform on Sunday, June 6, 2005 at the San Francisco Conservatory of Music. For more information and details, please visit www.infochopin.pl/en/wydarzenia.php/639/ .

Set to release May 31, 2005 on Albany Records, The Polish Traditionpresents a broad view of Polish music, featuring works in a wide variety of musical styles from the 18th, 19th and 20th centuries. Showcasing compositions for violin and piano, the album has works by various Polish composers, including Chopin, Bacewicz, Wrónski, Paderewski, Szymanowski, and Górecki. Tyrone Greive plays violin, and Ellen Burmeister plays piano on these 13 selections by 12 Polish composers.

The CD, code number Troy 754, will be available at Borders, Barnes & Noble, and amazon.com. For more detailed information about the CD, including a track list, see the Albany Records website at www.albanyrecords.com. Click on “New Releases,” and then scroll down to The Polish Tradition.

Coming up in the beginning of June, Marta Ptaszynska will see the premiere of her new solo viola piece, “Elegia in Memoriam John Paul II” at the thirty-third International Viola Congress in Reykjavik, Iceland. The congress takes place June 2nd through June 5th, and will feature master classes and performances with some of the world’s leading violists.

For more information, go to www.congress.is/viola2005/.

At one Polish culture website, www.culture.pl/en/culture/muzyka, an interested person can find plenty of information about Polish culture, including newly updated composer profiles as well as new essays about Chopin and Lutoslawski. The website also features weekly profiles about various Poles in culture.

MAY 5: Thursday, 7:30 P.M. Opening Reception and Screening of the New York Polish Film Festival. $35. Directors’ Guild Theater. See article above or the website.

MAY 14: Saturday, 9:30 A.M. – 12:30 P.M. “America’s Friends: The Images of Poland.” An uplifting blend of history, discussion and music. CNN documentary “Warsaw Rising” at La Fetra auditorium, followed by a performance of Chopin’s Nocturnes by the University of LaVerne Department of Music at Founders Auditorium. FREE. RSVP to Julius M. Walecki, 909.593.3511 ext. 4192 or email: waleckij@ulv.edu by May 9, 2005. LA VERNE, CA. See www.ulv.edu/mapsfor directions.

MAY 31: Tuesday. CD Release. The Polish Traditioncomes out on Albany Records. Available on amazon.com. See above for an article about the CD.

On April 13, the Polish Music Center gave a concert in the home of Amanda Horton, presenting the same music that was performed at USC on the 9th of March – Karlowicz songs and Zarebski Piano Quintet. Performers included the PMC’s own Marek Zebrowski at the piano and Krysta Close, soprano, as well as the USC Thornton Armstrong Quartet (Ilana Setapen, violin; Danielle Nesmith, violin; Lauren Chipman, viola; Peter Mccaffrey, cello). The program was extremely well-received by the audience of approximately 35 arts connoisseurs. All agreed that this fine but often unknown music should have a more prominent place in the performance repertoire.

On April 20, 2005 a portion of Camerata Pacifica chamber music ensemble performed works by Lowell Lieberman, Shostakovich, and Witold Lutoslawski. The audience gathered at 8:00 pm in the evening at the Huntington Library in San Marino to hear the musical renderings of guest pianist Norman Krieger, guest violinist Catharine Leonard, flutist Adrian Spence, and cellist Zvi Plesser. Distinctive for artistic excellence, an innovative approach to classical music, and a repertoire that ranges from baroque to brand new, Camerata Pacifica aims to expose the widest possible audience to classical music while revolutionizing popular conceptions of the genre.

Shostakovich: Trio No.2 in E Minor, Op.67 for piano, violin, and cello

From April 2 to April 22, the Stanislaw Moniuszko Grand Theater in Poznan hosted the fifth annual Hoffaman Polish-German Opera Festival. The Festival aims to promote the works of the German Romantic composer, E.T.A. Hoffman, as well as present instances of Polish/German cooperation and understanding in culture and the arts. The Festival included opera by Polish performers, a dance performance by the Polish Dance Theater, and performances of works by Polish composers including Chopin, Kilar and Penderecki.

For a detailed listing of the concerts that were held, see the web site www.culture.pl/en/culture/artykuly/wy_fm_hoffmannowski_poznan_2005

Presented by the Polish Cultural Institute and Janusz Sporek, the mass was well-attended by enthusiastic audience members.

US Tour Of The Wroclaw Philharmonic

On April 24 in New York City, the Wroclaw Philharmonic, conducted by Mariusz Smolij, played a concert with the seventeen-year-old piano prodigy Stanislaw Drzewiecki as part of its first-ever US tour. The concert program, held at Lincoln Center, was as follows:

A week and a half earlier, on April 8 at Brroks-Rogers Recital Hall, Williams College (Williamstown, Massachusetts), Ptaszynska’s Letter to the Sun for frame drum, narrator, and percussion quartet (featuring timetable) was performed. Joanna Kurkowicz, the Artist in Residence at Williams College, also performed the Recitativo and Arioso for solo violin. Ms. Ptaszynska gave a pre-concert talk about the pieces.

“His approach was clearly monumental.”

A remastered reissue of the 1966 Decca recording of Leopold Stokowski conducting the New Philharmonia Orchestra and the London Symphony Orchestra has just been reviewed by Patrick Stanford. In 1966 Stokowski went to London to conduct Vivaldi’s “Four Seasons” and Handel’s “Messiah.” At the spritely age of 84, Stowkowski would be tackling the “Four Seasons” for the first time in his lengthy career, and revisiting the “Messiah” after over 60 years.
Stanford says that this remastered version of “Four Seasons,” featuring Hugh Bean as soloist, highlights the contrast between Bean and his distinguished concertante ensemble. “The infectious delight of the performance” is more evident in this reissue than in previous versions, and this stands as a musically exciting recording. “Messiah” stands out as well, with superb soloists and fine choral singing.

To read the full review by Patrick Stanford or to order a copy of the CD, go towww.mvdaily.com/articles/2005/04/stokowski1.htm.