Coming Up: The 2012 Paderewski Lecture-Recital

The year 2012 marked the 75th anniversary of Karol Szymanowski’s death. Without a doubt, he was one of the greatest modern Polish composers who, by building upon the achievements of Chopin and Moniuszko, ushered Polish music into the twentieth century. Szymanowski’s body of work and his unique historical position make him the father of modern music in Poland. In fact, the great richness and diversity in Polish contemporary music can be directly linked to Szymanowski’s wide-ranging opus that encompasses late romanticism, impressionism, orientalism, and the assimilation of Polish folk music elements into his later works.

On October 14, the 2012 Paderewski Lecture-Recital celebrated Szymanowski’s anniversary with a lecture exploring his repertoire for violin, and a recital spanning the range of his many stylistic changes as displayed by his music for voice and piano. The event featured lecturer Maestro Grzegorz Nowak, Principal Associate Conductor of the Royal Philharmonic, as well as Los Angeles favorites Mark Robson, piano and Timur Bekbosunov, tenor.

Karol Szymanowski (1882-1937) has often been called Poland’s greatest composer after Chopin, and is credited with the modernization of Polish music. His catalogue includes a voluminous output of music for solo piano, violin, voice, operas, and several symphonies, yet his works are not often performed, particularly in the United States.

I first fell in love with the music of Szymanowski years ago when, as an undergraduate piano performance student, I visited the music library, intent on exploring the music of lesser-known composers. I sat for hours listening to this incredible music, wondering why I had never heard Szymanowski performed and determined that I must play as much as possible.

I was absolutely delighted to learn that the Polish Music Center was going to celebrate the 75th anniversary of Szymanowski’s death by presenting a concert dedicated solely to his works. The concert featured a lecture by Maestro Grzegorz Nowak, and performances by pianist Mark Robson and tenor Timor Bekbosunov. 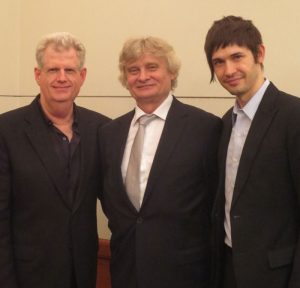 The first portion of the recital featured a lecture devoted to Szymanowski’s violin repertoire, and Maestro Nowak presented a wonderful sampling of this music. Nowak’s speech was informative, energetic and engaging, and his historical lecture was interspersed with recorded excerpts of many violin works. I appreciated Nowak’s discussion of Szymanowski’s compositional evolution. His early output abounds with the trappings of late romanticism, and reminds one of the music of Scriabin and Wagner. Szymanowski’s travels to Italy, Sicily, Greece and North Africa were highly influential upon his middle period music, which takes on a somewhat impressionistic style, much in the manner of Debussy or Ravel, but with a highly individual structural, coloristic and harmonic language. Szymanowski’s later music adopts Polish folk influence, particularly that of the Tatra Highlanders.

Nowak’s lecture and demonstration began with a discussion of Szymanowski’s Nocturne and Tarantella, Op. 28, a highly virtuosic work for violin and piano. He then played excerpts from Mythes, Op. 30, another work for violin and piano which fully demonstrates Szymanowski’s exotic, colorful and impressionistic middle period style. Nowak then discussed the two violin concertos, the first of which is the more “popular’’ of the two and fits squarely into Szymanowski’s middle period. The second concerto demonstrates the folk influence that would dominate Szymanowski’s final period. Indeed, the only period of Szymanowski’s musical output that was not really represented was his early music, which is somewhat of a shame because the composer’s Op. 9 violin sonata is a massive and interesting work and I felt that it deserved some mention. Although the lecture was directed towards Szymanowski’s violin music, I would have loved to hear Nowak speak about the composer’s symphonic music, especially given Maestro Nowak’s prowess as a conductor. The lecture as a whole was extremely enjoyable and informative, and set the stage quite well for the live performance in the second half. 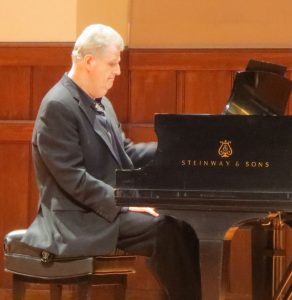 Pianist Mark Robson and tenor Timor Bekbosunov performed a variety of works spanning Szymanowski’s entire compositional development. Beginning with the Op. 1 Preludes for piano, the program included the middle movement of the Metopes, Op. 29, several of the Mazurkas, the final movement of the Masques, Op. 34, and the Songs of the Infatuated Muezzin. Although I enjoyed the entire concert, my favorite performances of the evening were of the Op. 1 Preludes and the Songs of the Infatuated Muezzin. Mr. Robson’s performance of the Preludes was nuanced and heartfelt, and the chemistry between Robson and Bekbosunov combined with each performer’s great musicality made the Songs incredibly convincing and captivating. Mr. Bekbosunov captured the exoticism and sensuality of the texts quite beautifully. I thought that the programming of the individual movements from Metopes and Masques (Calypso and The Serenade of Don Juan, respectively) could have been more successful if either one of those complete cycles had been performed, since the individual movements make more sense in the context of their partners. Additionally, because Szymanowski’s middle period music, while extraordinarily beautiful and colorful is also extremely complex, I felt that it would have been better represented had more of it been performed. Still, given the constraints of time and Szymanowski’s voluminous and extremely varied output, I felt that the program gave the listener a very attractive sampling of the composer’s works.

It was wonderful to hear a performance dedicated to Szymanowski’s music and the Polish Music Center did an outstanding job putting together this program. Maestro Nowak’s lecture and the performances by Mark Robson and Timur Bekbusonov were excellent. With more events such as these, perhaps Szymanowski will receive the attention he so rightly deserves.

Nic Gerpe (DMA, 2012; MM, 2008; BM 2006, University of Southern California) recently completed his Doctor of Musical Arts degree in Piano Performance at the USC Thornton School of Music. He studied extensively with Bernadene Blaha, Kevin Fitz-Gerald and Stewart Gordon. Nic has also worked with Earl Wild, Arnold Steinhardt, and Stephen Drury. Nic is a proponent of contemporary music, and his repertoire includes works by Rzewski, Crumb, Corigliano, Berio, and Szymanowski. Nic has given numerous premiere performances including the World Premiere of Dale Trumbore’s Piano Concerto as soloist with the USC Thornton Symphony and the US Premiere of Thomas Demenga’s Concerto for two cellos, percussion and prepared piano with members of the LA Phil, LA Chamber Orchestra, and Colburn and USC Symphonies. Nic has performed across the US and Canada and is an active chamber musician as well as soloist and recitalist. Nic’s duo with violinist Pasha Tseitlin is dedicated to the performance of the music of our time and the pair performs frequently in the Los Angeles and San Diego areas.