The Polish Music Center at USC presents the annual Paderewski Lecture-Recital on Sunday, 4 October 2009, at 3:00 pm at USC’s Alfred Newman Recital Hall. Co-sponsored by the Consulate General of the Republic of Poland in L.A., this year’s event features Polish composer Henryk Mikołaj Górecki, who visited the USC campus in 1997 to conduct his famed 3rd Symphony. PMC Director Marek Zebrowski will give a multi-media presentation about the life and music of Górecki, and some of Los Angeles’ most talented musicians will perform chamber music representing the full range of Górecki’s career. Performers include: the Denali Quartet, Irene Gregorio – piano, and Amy Tatum – flute. A reception will follow the concert. Please join us for an evening honoring one of Poland’s greatest living composers.

PMC Director Marek Zebrowski then presented a series of video vignettes of interviews with Henryk Górecki, talking about how and why he makes music, some examples of his orchestral music in wildly differing styles, and even video of Górecki playing a folk tune on his violin for some friends. If I carried anything away from this recital, it would be that Górecki is a most eclectic composer. As if to illustrate this point, Marek played a piece Górecki wrote for Wanda and Stefan Wilk, founders of the Polish Music Center, based on a musical rendering of each of their first names. It was as quiet and contemplative as some of the music to come was dissonant and driven.

Two pieces for violin (Joel Pargman) and piano (Ms. Gregorio) followed. The Variations(Op. 4) is a virtuoso piece, dissonant but not atonal, and very energetic, using a folk-like theme as its base. The Sonatina (Op. 8) was even more folk-like, and reminded me at times of bluegrass. Perhaps the hills of Appalachia are not so far from the Tatra mountains after all.

In a complete change of style, Amy Tatum played the Valentine Piece (Op. 70) for solo flute. Anyone who has ever gone birdwatching would immediately recognize first the short call notes, separated by long silences, and then the extended melody, as typical of a songbird’s repertoire. Next was a piece for flute and piano (Ms. Gregorio), For you, Anne-Lill (Op. 58), written for the flautist Anne-Lill Ree. The bell-like ostinato in the piano was accompanied by melodies on the flute, sometimes beautiful, sometimes raucous, giving one the image of a church tower being visited by a series of birds. It ended with the two musicians coming together in a more contemplative manner for a quiet ending. 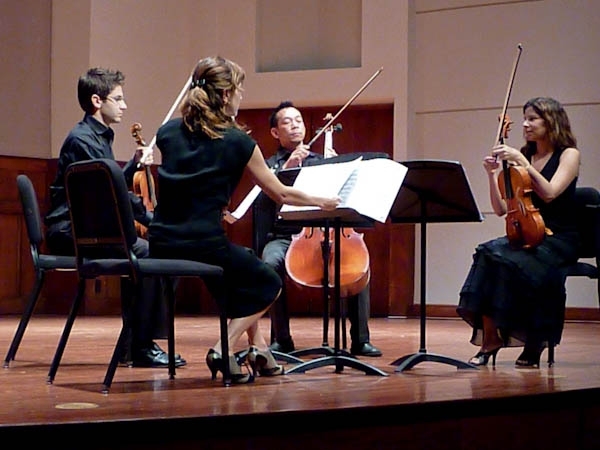 The last piece was the String Quartet #1, “Already it is Dusk,” (Op.62), played by the marvelous Denali Quartet. The title is attributed to a 16th century choral motet that asks for deliverance from evil spirits, and the music alternates between peace and the struggle against evil. The middle movement is extremely dense and dynamic, demanding much skill from the performers. The last movement, Molto lento-tranquilissimo, reassures us that our prayers have been heard.

Charles Bragg is a native of Los Angeles and a life-long supporter and intermittent student of classical music. He was awakened to the existence of Polish music beyond Chopin when the college chorus he joined sang the Szymanowski Stabat Mater, which he still considers one of the most beautiful pieces of music ever written. He and his wife Alice are Friends of Polish Music at the PMC as well as volunteers for the LA Philharmonic and the LA Opera.