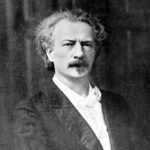 During the first two weeks of September 2004, Stanisław Skrowaczewski shared his talents and insights with the students and community of the University of Southern California. His residency at USC featured 2 public events. First, on September 15th, Skrowaczewski gave the annual Paderewski Lecture, presented by the Polish Music Center. This talented performer/composer/conductor discussed his thoughts on music with moderator Larry Livingston (former Dean of USC’s Thornton School of Music) and audience members. The event also included performances of Paderewski’s Cracovienne Fantastique and Skrowaczewski’s String Trio. Then, on September 16th, Skrowaczewski conducted the Thornton Symphony in a performance of his own Concerto for Orchestra, short-listed for the Pulitzer Prize in 1999, and the Symphonie Fantastique by Hector Berlioz.

Maestro Stanisław Skrowaczewski, distinguished conductor and composer, recently paid a two-week long visit to Los Angeles. Hosted by the University of Southern California Thornton School of Music and the Polish Music Center at USC, Skrowaczewski was in residence on campus September 6th-16th, giving master classes in conducting and composition, appearing in seminars and lectures, and working with the USC Thornton Symphony Orchestra.

Among the many highlights of his visit, Maestro Skrowaczewski delivered the 2004 Paderewski Lecture for the Polish Music Center. The September 15th event, held in the comfortable neo-Romanesque interior of United University Church, was moderated by Larry Livingston, the former dean of the USC School of Music, and featured performances of music by Paderewski and Skrowaczewski.

The program opened with Paderewski’s Cracovienne Fantastique for piano, performed by Marek Zebrowski, Program Director and Curator of the Polish Music Center. Afterwards, Maestro Skrowaczewski spoke at length about his life in music, sharing with the gathered audience many fascinating insights on his international career (now spanning over 50 years), his love of symphonic works by Bruckner and Szymanowski, and his substantial output as a composer.

Following his lecture, three current and former USC students—Danielle Nesmith, Lauren Chipman, and Jakub Omsky—performed selections from Skrowaczewski’s 1991 String Triofor violin, viola and cello. In preparation for this performance, the ensemble was coached by Professor Peter Marsh, Director of USC Thornton Chamber Music Program, as well as by the composer. Maestro Skrowaczewski seemed very satisfied with the spirited reading of this lively and virtuoso work, and the audience rewarded young musicians with a thunderous applause.

At the event’s close, the Honorable Paulina Kapuścińska (pictured above), Polish Consul for Culture, Education and Public Relations, thanked the Maestro and invited all listeners to the elegant reception, generously sponsored by the Consulate General of the Republic of Poland. The reception, which featured many Polish culinary delights, gave audiences members the chance to meet the maestro personally.

The following evening, September 16th, Stanisław Skrowaczewski conducted the USC Thornton Symphony Orchestra at Bovard Auditorium. The sold-out crowd heard an unforgettable performance of Skrowaczewski’s Concerto for Orchestra, a darkly dramatic and intensely personal two-movement work that filled the first half of the program. After the intermission, Skrowaczewski ably led the young USC players in a dashingly romantic interpretation of Symphonie Fantastique by Hector Berlioz, concluding an evening of music to remember.

Another special event in connection with Maestro Skrowaczewski’s visit was organized by the Modjeska Art and Culture Club of Los Angeles. The hosts for the evening, Mr. and Mrs. Stanley Kolodziey, opened their hospitable home to well over 150 club members and special guests who delighted in Maestro Skrowaczewski’s recollections of his youth in Lwów, and his early career in post-war Poland where, after his impressive debut as a young conductor in Wrocław, he was appointed as Music Director in Katowice, Kraków, and Warsaw.

During his visit in Los Angeles, Maestro Skrowaczewski also visited the recently opened Disney Hall, gave a special interview for Jim Svejda at KUSC-FM Radio, met with the USC Thornton School of Music Dean Robert Cutietta and several members of the faculty, and visited the Polish Music Center and its manuscript collection held at the Special Collections Room of the Doheny Library.

Stanisław Skrowaczewski commands a unique position in the international musical scene being both a major conducting figure and a highly regarded composer.

Born in Lwow, Poland, Skrowaczewski began piano and violin studies at the age of four, composed his first symphonic work at seven, gave his first public piano recital at 11 and two years later played and conducted Beethoven’s 3rd Piano Concerto. A hand injury during the war terminated his keyboard career, after which he concentrated on composing and conducting. In 1946 he became conductor of the Wroclaw (Breslau) Philharmonic, and he later served as Music Director of the Katowice Philharmonic (1949-54), Krakow Philharmonic (1954-56) and Warsaw National Orchestra (1956-59).

Skrowaczewski spent the immediate post-war years in Paris, studying with Nadia Boulanger and co-founding the avant-garde group “Zodiaque“. After winning the 1956 International Competition for Conductors in Rome he was invited by George Szell to make his American debut conducting the Cleveland Orchestra in 1958. This led to engagements with the New York Philharmonic, Pittsburgh and Cincinnati Symphonies and, in 1960, to his appointment as Music Director of the Minneapolis Symphony Orchestra (now the Minnesota Orchestra). Skrowaczewski has regularly conducted the major orchestras of the world as well as the Vienna State Opera and the Metropolitan Opera. He has made international tours with the Concertgebouw, French National, Warsaw and Hamburg orchestras, and twice toured the Philadelphia Orchestra to South America and the Cleveland Orchestra to Australia.

From 1984-91, following 19 years as Music Director of the Minneapolis Symphony, he was appointed Principal Conductor of the Hallé Orchestra. With the Hallé he gave concerts throughout England, led tours to the United States, Germany, Austria, Switzerland, Scandinavia, Spain and Poland and recorded for RCA, Chandos and Pickwick/Carlton.

Beginning with his Overture 1947, which won the Szymanowski Competition in Poland, many of Skrowaczewski’s works have received major international awards. Among his most recent compositions are his Symphony, premiered in 2003 by the Minnesota Orchestra, the Concerto for Orchestra, shortlisted for a Pulitzer Prize in 1999 and his Violin Concerto, commissioned and premiered by the Philadelphia Orchestra. Earlier works performed by major European and American orchestras are the Concerto for Clarinet, Concerto for English Horn and Ricercari Notturni, recipient of a Kennedy Center Friedheim Award in 1976, and at the end of 2009 his latest composition Concerto for Winds will be premiered by the Deutsche Radio Philharmonie and Bayerische Rundfunk orchestras.

Skrowaczewski’s interpretations of the Bruckner symphonies have earned him the Gold Medal of the Mahler-Bruckner Society, whilst his programming of contemporary music at the Minnesota Orchestra has been acknowledged by five ASCAP awards. An extensive discography includes recordings for RCA, Philips, CBS, Denon, EMI/Angel, Mercury, Vox, Erato, Muza, Arte Nova and Oehms Classics. Many celebrated earlier recordings have been re-released on CD and his digital recordings of Shostakovich, Brahms and particularly Bruckner have received highest praise. Skrowaczewski’s recordings of Bruckner’s 11 symphonies and Beethoven’s 9 symphonies with the Saarlændischer Rundfunk Orchestra for Arte Nova have received enormous critical acclaim, with the Bruckner receiving the Cannes 2002 Award for Best Orchestral Recording of 18th/19th Century Orchestral Work. Other recent releases include Shostakovich’s First and Sixth Symphonies with the Halle Orchestra on their own label and Shostakovich’s Tenth Symphony with the Deutsche Symphonie Orchester Berlin, recorded live in concert in 2003.

Stanisław Skrowaczewski is represented by Intermusica. 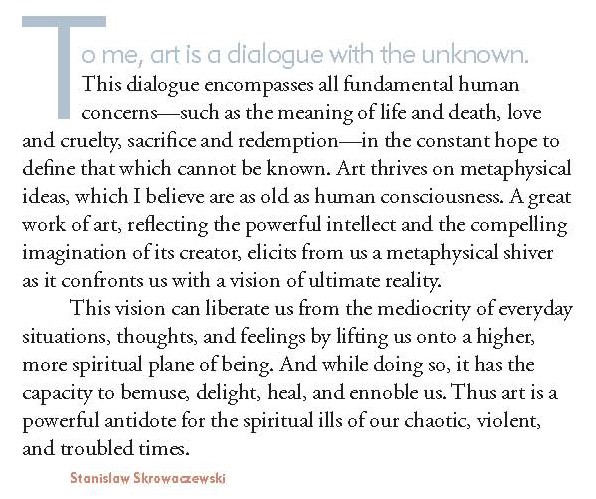